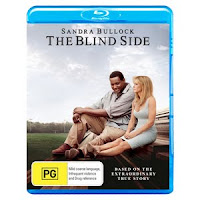 Lowdown: The true story of a well off white southern USA family adopting a black teen off the street and nurturing his venture into American football.
Review:
Let’s get it out of the way, shall we: I like Sandra Bullock even before she first Sped; yes, I liked her since Demolition Man. I am therefore happy to see her doing a proper dramatic role in The Blind Side, even if it is very clear she is dealing the normal Sandra Bullock comedy style card.
As always with these films that are supposedly based on real facts it’s hard to tell what the facts are and where the flavoring is (The King’s Speech springs to mind there); however, in relatively atypical a fashion we are talking here of a story that took place only recently and in essence is still taking place. Set in Tennessee, we follow a black teen called Michael Oher (Quinton Aaron): coming from the bad side of town to a mother that’s heavily into drugs this child does not have much prospects in life with no home to call his own; he does manage to stay clean, though. His physics (huge yet athletic) get him a spot at a Christian high school hungry for sporting achievements yet our boy is totally helpless in class.
Some people give Oher a chance: at first it’s one of the teachers who notices that the boy does respond to certain types of communication. Then there’s Leigh Anne Tuohy (Bullock), who can’t stand the sight of a boy about to spend the night in the street and brings him to her rich white people mansion’s sofa for the night. Then another night and another night, until Oher becomes a part of the family and the center of attention focuses on his American football prospects.
I have discussed my sensitivity to feel good films here before, and The Blind Side exploits that sensitivity very well, pressing those sensitivity buttons with much power. The result is a riveting emotional drama that blackmails you into feeling good for our heroes and the sacrifices they make for one another, almost making you feel as if you would have done the same if in the Tuohy’s shoes. Yeah, right; if things really worked this way we would have had socialism all over the USA and no black person would feel disadvantaged.
Instead we witness a film depicting heroes that often claim to act altruistically because they’re Christians, as if Christianity has a monopoly over doing good things to one another and as if Christianity was never used in order to do bad things to others. Granted, this may be the director’s way of being loyal to true events: after all, we are talking here about events taking place deep in the USA’s south, Republican heartland. People there are weirdos. [A bit off topic, I couldn’t avoid noticing one of the questions in a school quiz handed to Oher was about evolution; perhaps things are not as bad as they seem in those southern lands]
The question is, how should I walk away from this emotional manipulation? If I look at The Blind Side from the social point of view I would say this is trash and bury it. I, however, tend to watch films for their entertainment value first; clearly, The Blind Side was designed to entertain first and make you think last. I would therefore say that The Blind Side fulfilled its purpose by making me feel good for a couple of hours. And I like feeling good.
I also liked Bullock’s acting, by the way. She was really good.
Best scenes: Ignoring the emotional ones for a minute, isn’t it amazing how exciting American football always looks on film, whereas in real life (or live TV) its plagued by extraordinary lengthy waits for a brief few seconds of action?
Technical assessment: An average Blu-ray with a nice picture that suffers from reddish hues, especially indoors, and a soundtrack that’s too held back for my taste.
Overall: I’ll be generous, the way I tend to be with feel good films, and give The Blind Side 4 out of 5 stars.
Posted by Moshe Reuveni at 3/08/2011 10:36:00 pm
Email ThisBlogThis!Share to TwitterShare to FacebookShare to Pinterest
Labels: Film