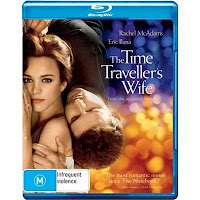 Lowdown: The relationship between a woman and a guy who keeps on involuntarily travelling through time and space.
Review:
Our hero discovers his unique trait of time travelling as a six year old, when “beaming up” out of his mother’s car as it is about to crash saves him but kills her. The double edged sword nature of his gift for displacement is encountered again and again as our now adult hero (Eric Bana) meets a younger version of the girl he will end up loving (Rachel McAdams). The two settle down, but can they really settle down when the guy keeps on popping in and out, leaving the girl on her own for indefinite periods? And can the two lead a normal life when they have a pretty good idea of what the future has in store for them?
I like Eric Bana; he’s even starring in this blogger’s own image. What I liked more about The Time Traveler’s Wife, though, is that it made me think. Even though Bana takes center stage, the fact the film is named after his wife renders that inevitable thought, “why”, and makes you look at the relationship that’s at the center of the film from her point of view instead of focusing on exotic time travel.
Through the name that focuses on the wife rather than the traveller I got to think genres. On paper, The Time Traveler’s Wife is a science fiction film; after all, time travel has been the bread and butter of many a science fiction film. However, the way the is made renders The Time Traveler’s Wife much more of a romantic chick’s flick rather than a science fiction film. It’s a matter of emphasis: the emphasis is not on the details of time travel, so much so the film totally ignores the fact our traveller travels through space just the same in its title; the emphasis is on the dynamics of the relationship instead, and who cares if the details of the time travels do not make much sense (even if you accept time travel as physically possible it’s hard to accept it being caused by a genetic fluke, as the film suggests). Then again, one can argue the best science fiction is the science fiction that doesn't feel like science fiction.
This warm and fuzzy feeling the film leaves you with makes it hard to tell what message it is, exactly, that it wants to convey; just like reading the bible you end up making whatever message you want to take out of it. So if you ask me, The Time Traveler’s Wife errs on the fatalistic side of things, an approach I disapprove of. Its saving grace is that through the tale of romance whose chronology is known in advance it can be interpreted slightly differently: it says that the decisions are still yours to make, but with the way this world is the result is going to be the same whatever course it is that you choose to follow. Not too promising, is it? Yet you have to admit that it does fit a lot of what’s taking place in our world: scientists, for example, are telling us for decades now that we are boiling our planet to death, yet the result of their actions is the same as if they wouldn’t have said a word.
Interesting scene: Bana brings a winning lottery ticket back from one of his time travels. What took him so long? I would have done it the first time around.
Best scene: Hard to describe without causing a blooper, but the film’s climax – which draws the time travel card yet again and pulls out an ace – drew a tear or two from me.
Technical assessment: A mediocre Blu-ray. The picture is not as detailed as it should have been and the sound, while fresh and authentic, fails to envelope.
Overall: Often touching, yet fails to soar. 3 out of 5 stars.
Posted by Moshe Reuveni at 2/28/2011 10:13:00 pm
Email ThisBlogThis!Share to TwitterShare to FacebookShare to Pinterest
Labels: Film