Clint: A Retrospective by Richard Schickel 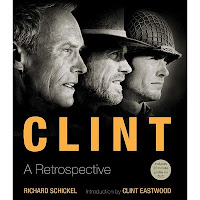 Lowdown: Clint Eastwood as reflected by his work.
Review:
Clint: A Retrospective is the first and so far only paper book that I bought myself since getting heavily into the world of electronic books, which says a lot. It says that this is a book that works because of its format: a heavy coffee table book, made of glossy paper throughout and rich with photos, Clint: A Retrospective is not necessarily meant to be read from start to finish but it definitely invites the occasional flick.
Yet I did read it from start to finish and found myself not only enjoying the proceedings but also learning a lot about Clint Eastwood, who – as I have said on these pages many times before – is probably my favorite moviemaker of all time. Reading the book explains why.
Let’s make it clear: Clint: A Retrospective is a book about Clint Eastwood. Contents wise, the books starts with an intro from the man itself (Clint Eastwood again!). It moves on to an overview of Eastwood’s early years, and then goes through each of the films Eastwood took part in as an actor or as director, finishing things off with Invictus (obviously, the book is too old to include Eastwood’s Hereafter). The movie discussions take up most of the page real estate, supplying some glorified photos but also – and surprisingly – containing some articulate reviews of the works at hand, their impact on Eastwood and the impact Eastwood made on them. Often delving into the personal realm, they reveal the details of a person who is anything but the image I used to have of Eastwood once upon a time before I learned to appreciate the man and his pursuit to explore new realms while leaving his uncharacteristic macho image behind.
The final result proves to be not only an interesting book to flick through in order to see the photos, not only a highly entertaining experience, but also a good read. You read the book and you witness proper character development, as if you’re reading a great work of fiction. It is obvious that author Richard Schickel knows his subject matter.
Note the book is bundled with a DVD. That DVD is a rather short twenty minute affair mimicking the spirit of the book but replacing printed stills with clips from Clint's repertoire at Warner Studios. It's nice, but let us be clear: the book is the main event here. That said, let the record show Clint: A Retrospective has tremendous gift appeal with its magnificent presentation.
Overall: Clint: A Retrospective is a great book for any film buff and an even better book for anyone with special interest in Clint Eastwood. I started this review by stating this is the first paper book I got since going electronic; I will finish by saying this is the first and only book of its type I ever read in its entirety. A book with such achievements under its belt deserves 4 out of 5 stars.
Posted by Moshe Reuveni at 2/13/2011 09:13:00 pm
Email ThisBlogThis!Share to TwitterShare to FacebookShare to Pinterest
Labels: Book