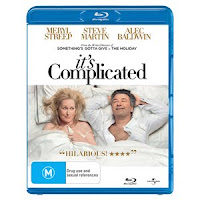 Lowdown: A former couple has another go.
Review:
From time to time we rent a film for its sheer star power, as was the case with It’s Complicated: I consider Meryl Streep the best female actress around even if I don’t like most of her films, and Alec Baldwin – her partner on the Blu-ray’s cover photo – has had enough small comedy roles recently to make me want to watch more of him. Granted, upon a closer inspection of the Blu-ray at home I was rather dismayed to find It’s Complicated was directed by The Holiday’s Nancy Meyers, but by then it was too late.
While It’s Complicated may boast complicated circumstances, it is still essentially a love triangle story delivered as a romantic comedy that is obviously heavily oriented towards the female viewer. The premises are uncovered a tad slowly but they’re clear enough:
Between them, Streep and Baldwin have three kids, all of which have left home. Both parents are successful at their respective careers, and as becomes clearly evident by the stuff they’re surrounding themselves with they have not known financial strife for many years. However, following many years of marriage our heroes have been divorced for ten years now, the result of Baldwin hitting things off with a much younger woman to whom he eventually got married. By now cracks appear in Baldwin’s second marriage and the disadvantages of being married to a young woman with certain expectations are taking their toll, while Streep has obviously never recovered from her divorce and is still looking for a sense of direction.
Now comes the detonator part. After their long years of separation, Streep and Baldwyn meet at their youngest son’s graduation ceremony. A few drinks later they find themselves in bed. In parallel, a certain spark is lit between Streep and the architect working on extending her home, an under utilized Steve Martin; Streep has to decide which is the right way for her while contending with the notion she is now an adulterer.
It’s Complicated tries to tell us an important story about getting over your past and moving on with your life with the help of the people in your life and while helping the people in your life. However, it tells this important story without sending off any sparks; the story is told in a rather bland and unexciting manner despite the bottomless comedy talent in store here. Most problematic is the duration of the ordeal: there is simply no justification for this film to take two hours other than a successful attempt to waste our time and bore us.
Another problem of sorts with It’s Complicated is its overly American nature. Most of the films we watch are made in the USA, but that is mostly testimony of the dominance of the American movie industry rather than an indicator of my preferences. At the same time, most films are perfectly watchable for non Americans by virtue of the fact they can take place anywhere, to one extent or another. That is not the case with It’s Complicated: a lot of the cultural nuances it uses, like the graduation ceremony that is pivotal to the plot, are very American and too conspicuous for this non American to pass without attracting too much attention. I realize I am not the film’s target market but the film’s relative lack of universal appeal needs to be noted.
Best scene: The most interesting thing about It’s Complicated are the similarities between Streep’s character in this film and in Julie & Julia. In both cases she visited France where she learned to cook and in both cases she makes her living from her cooking expertise. It was fairly natural for me, then, to find the scene where she cooks chocolate croissant for Steve Martin’s character as the film’s most interesting scene, if only because it was interesting to see how these cookies (?) are made.
Technical assessment: This Blu-ray sports a good but still average picture. The sound is too mundane and a bit of a waste of the Blu-ray format’s capabilities.
Overall: It’s a nice story that should be told; the execution fails it, though, and places it at between 2 to 2.5 out of 5 stars.
Posted by Moshe Reuveni at 1/17/2011 10:33:00 pm
Email ThisBlogThis!Share to TwitterShare to FacebookShare to Pinterest
Labels: Film