It's that day of the year again when this blog looks back at the year that was and awards the coveted R-Ward to the best it has seen this past year. But before I go and do that, let me pause to commemorate a special occasion.
You see, today this blog is celebrating its fifth birthday. I therefore demand the right to pat myself on the back! In its five years the blog has achieved the following:
Making it very clear that the costs of writing, as in the time invested, far outweigh its tangible benefits.
Enough about the blog; let’s have a look at the year that was and pick the best of its crop up.

Trends:
A couple of years ago I reported a revolution on these pages, the revolution of high definition video and Blu-ray in particular. Both had an impact on my viewing, because they made watching films at home that much more attractive a proposition.
This year I am happy to report a much bigger revolution: the entrance of the ebook into my life. We can all be skeptical and claim there is no substitute for paper books etc, and I have been known to make that claim myself. However, from the minute I put my hands on my Amazon Kindle ebook reader, almost a year ago, I could see that this device was about to significantly change my reading habits. I won’t repeat how the Kindle changed my reading habits (you can read about it at great length here, here, here and of course here). What I will say is that I have been reading much more than I used to before acquiring my ebook reader, as can be noted by my much more prolific book reviewing escapades this year. That, I believe, is the biggest reference letter I can write in favor of the electronic book.
I will also add that the future of the paper based book looks bleak. We stopped buying them, other than exceptional specialties (e.g., books reach with graphics or children books). We’ve also stopped, effectively, reading the huge stocks of them that we have at home; it looks likely they will be condemned with the fate of my VHS and CD collections.
More importantly, I see no reason why my personal experience as an early adopter won’t be reflected in society et large during the very near future. The proliferation of tablets, in particular, is the signed death warrant on the door of the paper based book. The Federal Minister for Small Business has already predicted the demise of the conventional book shop within five years, to the great outrage of many. If you ask me, this affair only demonstrates how shooting the messenger is still a very popular sport.
Books are dying. Long live the ebook!

Best Film:
In contrast to the average year, where this bloggers’ favorite films happen to belong to the science fiction genre, this year had been almost empty of sci-fi. It started out looking as if this is going to be the year of the war film, first with Beaufort and then with The Hurt Locker. Then The Adjustment Bureau emerged as a candidate well worth crowning of the science fiction genre, almost pipping the post.
However, there was one film I enjoyed more than anything else this year. A simple film, a feel good film. Then again, given it was made by Ricky Gervais and Stephen Merchant, I should have seen through Cemetery Junction all along, shouldn't I?
It is very rare to watch a seemingly simple film combining the many elements required to make a film leave a lasting impression, but Cemetery Junction achieves that feat in a very entertaining manner.

Best Book:
Some would see it as a sign; I don’t care for such omens, but I cannot deny that the first book I ever got to read on my brand new ebook reader also happened to be one of the best books I ever read and one of the best things I have seen in fantasy literature in decades. John Scalzi acquired his general fame with the books he wrote prior to The God Engines, but as far as I am concerned it was The God Engines that cemented his status as one of my favorite authors, period. It was so good a book I simply knew there was no way I’d be lucky enough to read a better book this year.
Then again, The God Engines was almost sneaked at the post by another unlikely book. A rare example of quality science fiction humor, Agent to the Stars took me by total surprise as I read it from start to finish entertained from head to toe. Then again, what should I expect? It was written by one John Scalzi, who almost stole this year’s R-Ward for Best Book from himself. Almost. 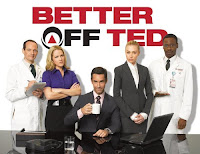 Best on TV:
This year had been the year of the American sitcom for us, triggered by our discovery of the existence of a TV comedy series we can finally identify with: The Big Bang Theory. However good this sitcom is, and I think it is pretty good, it find it does not soar into Seinfeld heights the way other geek comedies do (I’m thinking about you, The IT Crowd). I also think that after four episode rich seasons the series has definitely overstayed its welcome. However, The Big Bang Theory did serve a purpose in making us open to the American sitcom concept, which has been largely forgotten by us in recent years (mainly due to our avoidance of commercial TV, coupled with the insistence of ABC to rely almost exclusively on British content).
Our openness to the American sitcom led to us getting exposed to Better Off Ted, which is definitely made of R-Ward deserving material. This comedy about corporate office life is not only funny and witty while offering some fine acting displays (most notably from Portia de Rossi); it does what all good comedies do, which is laugh at things that are extreme but also have more than a grain of truth in them. Given that I spend most of my non sleeping hours at work dealing with issues not dissimilar to Ted & Co, I greatly enjoyed Better Off Ted.
Which explains why the series has been discontinued after two relatively short seasons.