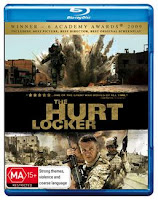 Lowdown: A team of three American bomb squad soldiers struggle to survive the last month of their Iraqi tour.
Review:
Kathryn Bigelow and I go a long way. Back in the days of Point Break and Strange Days a lot of it was because of her short lived marriage to James Cameron, who at the time was my favorite movie maker and is still very much up there. Yet Bigelow is an excellent director in her own rights with a very in your face style, as the opening scene to Strange Days indicates and as The Hurt Locker certainly proves.
The Hurt Locker takes us to contemporary Iraq and we’re immediately introduced to a group of three bomb squad soldiers as they dismantle a bomb in the middle of a busy street. Things go wrong and the team leader (Guy Pearce) doesn’t make much screen time. He is replaced by a hotshot ranger (Jeremy Renner) who is not too careful about quickly building himself a reputation for being addicted to danger and perhaps careless in his ways. With his team only having a month or so to go on their tour of Iraq, his other two team members are not exactly fond of this newly introduced risk to them going back home in one piece. Team camaraderie and identity evolve as The Hurt Locker takes us and the team from one extreme situation to another without much time for them soldiers and us viewers to take a breath in between.
War films are a genre I generally like because they take the human condition to its extremes. There are plenty of good samples for the genre out there and The Hurt Locker joins the top of the rank by being the first to provide a certain look at war. With The Hurt Locker you’re not fighting a war; you’re just out there again and again with a group of soldiers trying to make it through. Being a bomb dismantling unit, they are not about conquering land or fighting enemy soldiers but rather they’re about countering traps and mere survival. Bigelow explores human nature through this unique mix of characters' ongoing fight to survive, with emphasis on the particular bit that seems to attract itself to trouble so much so it’s hooked on it.
It's interesting to note Bigelow does not have big time stars as main cast members. I wonder whether that was due to budget restrictions or whether it was an artistic decision, since the film does sport some famous names doing cameo like roles: the previously mentioned Pearse, David Morse doing a deranged colonel that seems to be a direct descendant of Apocalypse Now's Rubert Duvall, and Ralph Fiennes playing a mercenary commando trying to make millions by hunting down wanted Iraqis (the ones from the USA's famous pack of cards).
Style wise, The Hurt Locker is incredibly intense. Camera work and editing mean there’s hardly a rest and things are always tense. What captured me the most, though, is the realism. Now, we’ve had plenty of realistic war films before: Saving Private Ryan, for example, started a trend of war films showing us high friendly body counts, piles of dead bodies and much gore. The Hurt Locker doesn’t go there; what it shows us instead is the realistic playing field in which modern day war takes place. To borrow from the Call of Duty computer game series, The Hurt Locker is the Modern Warfare version. For the film’s two hours plus, we follow the heroes as they navigate Iraqi streets filled with local population overflowing with different emotions towards them but generally hostile. For the film’s two hours plus, I found myself back in the West Bank doing my non combat work while surrounded by civilian population with a variety of attitudes towards me: most want to just live their lives in peace and quiet, others are openly hostile, while others actually try to express their hostility to a level that keeps you on your toes and grinds you down so much that you are not your usual you anymore. I couldn’t help it: even if my experience was not half a percent as intensive as what takes place on the screen, everything just looked so similar, so life like, so authentic.
Best scene:
Perhaps the best remembered scene would be the suicide bomber one. I, however, liked the closing scenes where our heroes leave Iraq in a van that's being stoned by little kids in the exact same way my van used to get stoned at the West Bank. Then we cut to see Renner's characters back home at a supermarket aisle, not knowing what to do with himself as he's surrounded by shelves of cereal, and I couldn't avoid remembering how odd the ordinary world (often referred to as "civilization") used to seem to me after coming back home from the army state of mind.
Let no one tell you that being an occupying force does not have a negative effect on one's psych.
Technical assessment: The picture and the sound on this Blu-ray both collaborate with Bigelow's approach of putting you in the thick of things. It's done with camera movement but it's also done with high contrast, often grainy picture. The result fits the occasion well even if it does not feature the best picture ever. The intensive, claustrophobic soundtrack compliments the picture well.
Overall: 5 out of 5 stars for this very authentic look at people doing war.
Posted by Moshe Reuveni at 12/22/2010 10:58:00 pm
Email ThisBlogThis!Share to TwitterShare to FacebookShare to Pinterest
Labels: Film