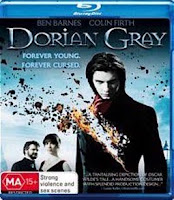 Lowdown: The tale of a man free to sin because his picture pays the consequences.
Review:
I suspect you could argue Oscar Wilde’s The Picture of Dorian Gray is one of my favorite classic literature books given the fact I read it out of my own free will twice and enjoyed the experience. The Dorian Gray myth has started early with me, the result of childhood stories my father used to tell me about this book where a guy stays young as his picture grows old. Described this way, the story of Dorian Gray sounds quite innocent; reading it meant it left a significantly less innocent impression in my head. The film interpretation discussed here, from 2009 - where the name was truncated to just Dorian Gray - is anything but innocent; it doesn’t leave much room for the imagination to conjure any sense of innocence.
As we start, we meet a young Dorian Grey (Ben Barnes) living in Victorian England. The heir of an old dude no one liked, our country boy arrives at London a very innocent youth to claim his heritage. That youth and innocence is quickly spoiled by his adopting mentor of a lord (played by Colin Firth), who keeps on telling our Dorian to lose himself to temptation. Other friends, like a painter who draws a wonderful picture of Dorian’s image, warn our hero but to no avail: quickly enough Dorian Gray turns into an evil dude heavily into hedonism with total disregard for anyone but himself. Gray does not hesitate to use any woman in town sexually, even when his actions live them dead – either physically or mentally. That's because he has a secret: his portrait, which he keeps secret in his attic, takes all the punishment for his actions. He gets to keep his youth while his drawing gets uglier and uglier. The question is, how low can he go?
I will admit to not being able to tell how loyal this Dorian Gray is to Wilde’s original; the eight years that passed between me last reading the book and me watching the film mean I only have the book’s rough outline in my head. What I can say is that the film seems to tell the familiar story, period. The problem is that the film does not leave much room for the imagination. I’m perfectly fine with its more visceral than we’re used to depictions of Gray’s sexual adventures, even the homosexual ones; in fact I praise films that dare go where Hollywood’s accountants and marketing department don’t (Dorian Gray seems a British production, sponsored by British Lottery none the less). Yet being too visceral means that you’re also leaving not as much room for the imagination and not much room for doubt, which makes the film lesser for the thinking viewer and instead pushes it more towards the more conventional genre of Victorian horror. While the directors have every right to go down that path, I cannot say I’m much of a fan. So yes, I enjoyed watching the film, but I also couldn't avoid feeling disappointed.
Worst scenes: Every time we encounter the picture we are exposed to attacks of the cheap horror kind. Why does the picture need to have monster snorting like sound effects associated with its screen appearance?
Technical assessment: The picture is quite good, even if the colors seem to be purposefully distorted towards that good old dark Victorian look. Sound is finely depicted, even though it cannot be said to be anything particularly special for a Blu-ray.
Overall: 3 out of 5 stars, but it could have [easily] been much better.
Posted by Moshe Reuveni at 12/13/2010 09:32:00 pm
Email ThisBlogThis!Share to TwitterShare to FacebookShare to Pinterest
Labels: Film