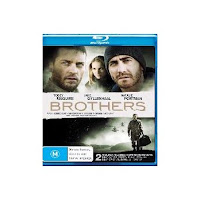 Lowdown: The triangle between an ex criminal, a soldier/brother and the soldier’s wife.
Review:
Jim Sheridan’s Brothers is a film I liked from start to finish, quite the contrast from the other film of his I got to review recently, In America. It certainly left me wondering whether Brothers is so good because it’s so heavily based on the Danish original from 2004 or whether it was Sheridan’s touch in moving it to a 2007 American setting that made the difference, but regardless – a good film is a good film.
Set in what seems to be a cold middle of nowhere American town where people can either join the marines or turn into the wrong side of the law, and where raw religion provides the main anchor for people’s identities, we are quickly introduced to the three characters around which the whole film revolves:
Just as Gyllenhaal is released back to society Maguire is taken away from it, shipped with his unit over to Afghanistan. There his Blackhawk is shot down, leaving the army to think he’s dead and his family to try and cope with the loss. As Portman tries to deal with the loss, Gyllenhaal finds himself forced to rehabilitate out of the need to help her; something happens between them while we are exposed to the family's dysfunctionalities. Maguire, however, isn’t dead; he’s a Taliban captive, where he goes through horrific experiences in order to get back home. By now you can probably imagine where Brothers would be leading you to.
As dramas go I would say Brothers is top rate. Everything seems to work in its favor: the plot is credible and easy to relate to and the dynamics of things is excellent. There is no bullshit along the lines of a turnkey event dependent on a some stupid lie, as often happens with Hollywood dramas; the extreme circumstances of Afghanistan make sure turnkey events are easily acceptable and do not suspend disbelief. The characters are authentic, and the triangle at the center of things shifts our perception of good and bad nicely and effectively. This is movie making at its best: it looks simple but it takes us on a journey to catharsis.
Credit has to be given to the actors here. It is rare to see so much fine acting: all the center three as well as Sam Shepard playing the brothers' father give away excellent performances. As usual, I really like Gyllenhaal, but I have to say that it is Portman on whose shoulders most of the burden is laid. She deals with it in flying colors.
Best scene: The scene that touched me the most was the one in which Portman gives away her dead husband’s clothes to a guy working at her kitchen that had paint spilled over him. It’s a fine example for when a mundane incident hits on a major turning point, because I don’t think there’s a manual out there stating when the optimal stage for getting rid of a dead person’s possessions is. Especially when that person happened to be someone you truly cared for. Anyone that experienced a loss would identify with Portman there.
Technical assessment: To say this is a mediocre Blu-ray would be an understatement as the picture here offers less detail than a well made DVD (or, for that matter, an not so well made DVD). The sound isn’t spectacular either: other than one or two notable scenes you could easily mistake Brothers’ for a mono soundtrack.
Overall: An excellent drama where the things that matter in the making of a good drama click well. 4.5 out of 5 stars.
Posted by Moshe Reuveni at 12/20/2010 11:12:00 pm
Email ThisBlogThis!Share to TwitterShare to FacebookShare to Pinterest
Labels: Film