The Atheist’s Guide to Christmas 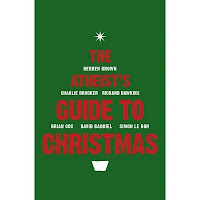 Lowdown: 44 atheists’ essays themes around Christmas.
Review:
The Atheist’s Guide to Christmas is a book selling itself with the promise of being a book the conscious filled atheist can give their [presumably theist] grandmother for Christmas. I don’t know if that statement can apply to all grandmothers; aside of the fact they are past being able to read anything, mine grandmothers couldn't care less about Christmas. However, given the interesting premises and writers collaborating here I took the plunge and spent a whole dollar buying this book for my Kindle. For the record, all proceeds go to secular charities (I believe these are HIV related but don’t take my word for it).
Essentially the guide is a collection of 44 essays written by prominent atheists, mostly British ones. Comedians make a significant portion of those while famous skeptics like Richard Dawkins make another, but there are also some unexpected faces like Simon Le Bon. Personally, I happened to realize some people I've previously met in the world of Twitter happen to be fellow atheists (e.g., Ben Goldacre): it's interesting to note how like meets like through the vast world of Twitter even you're not truly aware of your likeness.
Most of the the book's essays can be related in one way or another to Christmas through their themes, and the book further helps us by dividing them into separate sections like personal stories, events and philosophy (my pick of the lot). The best way to describe the outcome? It feels like reading lots of different bloggers discussing the same thing in their own different ways.
As can be expected, quality varies. Le Bon’s entry, for example, is quite personal but will not deliver much in the way of illumination; AC Grayling’s entry gets my vote for best essay, confirming that here is another person I would very much like to have dinner with. Another essay that touched me tells the story of a young boy growing up in a religious family while pen-palling the famous skeptic James Randi and eventually meeting Randi at Oxford, at the house of Randi’s friend Richard. This guy f-ing spent a weekend at Richard Dawkins’ house discussing the most interesting things with the most interesting people, just like that, without giving me a call! Who do I need to start writing letter to?
Granted, a significant portion of the essays are not particularly interesting, especially to non British readers. Given the format, one cannot expect discussions that would take your understanding of the universe into another dimension. I was also dismayed with the fact I didn’t know who most of the authors were, only to find short resume like accounts of them piled at the book's very end; I would have preferred to have those associated immediately with their respected essays. However, criticism aside, there can be no denying The Atheist’s Guide to Christmas works and works well:
One last note regarding the importance of this book existing in the first place. When I hear calls at my workplace that we should have Christian Christmas celebrations for our work celebrations, as opposed to just Christmas celebrations, I get annoyed. I don’t mind people celebrating Christmas in any way they feel like, but I do mind being dragged into their way. Christianity has hijacked Christmas some 1600 years ago from others whose traditions are still very much there (let the Atheist’s Guide to Christmas tell you about the way the holiday is celebrated in Scandinavia for evidence). My point is that the rest of us, that is – the majority of us – need to stand up to protect our right to celebrate what we feel like, whenever we feel like and however we feel like. The Atheist’s Guide to Christmas stands up for that cause.
Overall: Don’t let the 3 out of 5 stars I’m giving this book deter you; The Atheist's Guide to Christmas is worthy of everyone’s attention.
Posted by Moshe Reuveni at 12/17/2010 03:02:00 pm
Email ThisBlogThis!Share to TwitterShare to FacebookShare to Pinterest
Labels: Book