The Finkler Question by Howard Jacobson 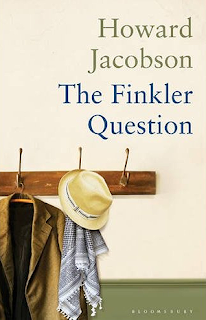 Lowdown: Three friends in search of Jewish meaning.
Review: Books like The Finkler Question are not books I regularly read. I was, however, a bit fed up with science fiction and I wanted a worthy distraction; as I just happened to hear Finkler had won surprisingly the Man Booker Prize, the surprise being on account of it being a comedy, I thought this might be the distraction I was looking for.
After reading the book I would say "comedy" is the last term I would use to describe it. It's more like a tragedy where the rare funny moment comes out of sadness rather than the laugh out loud association we normally fix with comedy. Being a remotely funny tragedy is a trait of what I commonly refer to as Jewish prose, things like Fiddler on the Roof, the stories of Shai Agnon we were forced to study at my Israeli school, or the recent Coen brothers film A Serious Man. It is no coincidence I found resemblance between Finkler and Jewish prose: although I was totally unaware of it at the time I chose to read this book, The Finkler Question is Jewish prose. It is as modern an incarnation of Jewish prose as it gets.
The story tells us of three contemporary Londoner friends. Julian Treslove, a gentile, is the main character. At his late forties-early fifties, Treslove is still to form an identity for himself; all he knows is that he has a love-hate relationship with his former school Jewish friend Finkler that causes him to refer to all Jews as "Finklers". Both like the company of Libor, an old high society Jewish journalist who used to be their teacher. Libor and Finkler are recent widowers, but Treslove never had a meaningful relationship. One night, after a joint meeting, Treslove is robbed by a woman at a well lit street, which (through a very articulate line of arguments) starts him pondering Judaism and looking for meaning there. There follows the rest of the book, discussing the trio's personal relationship while the questions of Judaism, antisemitism and Israel are discussed through those.
There is a lot to say in favor of The Finkler Question's style. The book uses rich language throughout, sending me to use my Kindle's dictionary almost on a page by page basis. I'm not complaining; I appreciate Jacobson doing his bit to enrich my life. However, there is an air of artificial pompousness to it all: in my opinion, discussions that could have resolved in a few sentences tend to stretch over pages and pages. During this fairly lengthy read I have had repeated cycles of wishing to see what transpires quickly followed by lengthy "I wish he could get a move on" or "this is going nowhere" downturns.
Yet at its core this is a book about the Jewish question, and that question is analyzed quite ingeniously thorough the analogies the book offers between Judaism and the characters at hand. Do not expect to get your conclusive answers to everything Jewish or Israel related here, although I would say that in comparison to the Jewish prose we were forced to learn at school The Finkler Question is ten times better: it is both modern and relevant, in a way that should have better access to the minds of those that read it.
I have already discussed my views on some of the questions raised by Finkler here, mostly to do with my attitudes towards Israel and Zionism. My main remaining feedback concerning The Finkler Question is related to the human centric approach I have proposed in my discussion on Israel, and that is my conclusive answer to the questions raised in Finkler but never answered. My answer is simple: Although I was born to a Jewish family I do not consider myself a Jew nor do I consider Judaism a necessary part of my life. In fact, I am of the opinion my life is better without Judaism. I have a simple view of life: I do not need religion or tradition to tell me where I belong or what my identity is; I can form those on my own using things that are not arbitrary but are rather very well grounded. Science, common sense and human oriented world views give me all the identity and foundation I need to lead a healthy life; if more people were to follow this example they would see that we can all live in harmony together without having this unexplainable need to put artificial labels on each person's forehead. Thus The Finkler Question's failure to include humanism in its scope is by far its greatest failure.
Overall: I found The Finkler Question interesting enough to merit a read but I would certainly not award it as anything special. 3 out of 5 stars.
Posted by Moshe Reuveni at 11/16/2010 10:43:00 pm
Email ThisBlogThis!Share to TwitterShare to FacebookShare to Pinterest
Labels: Book

Plot:The story revolves around 3 central characters.One of whom is a jew an who plays the 'Race card' for his benefit.The story is nothing exceptional and it revolves around adultery and jews as such.The critics have said that it is first comedy to win a booker.

Comment:To be honest,i did not get most of the humour the Booker guys talked about.Either it was too subtle for my understanding or by humour i may have become use to crass and loud jokes.Either way i didn't not find the book as anything out of ordinary.

Given an opportunity again i may give it a skip for something else.