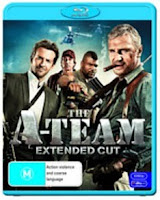 Lowdown: The longer version of the story on how The A-Team came to be and how they achieved renegade status.
Review:
Back at the time and place I grew up in, The A-Team was staple TV food. Friday afternoon in eighties’ Israel were devoted to The A-Team cause. Personally, I still remember the double episode pilot featuring a different Face to the one that was later borrowed from Battlestar Galactica’s Starbuck role. I also have fond memories of the other characters, mostly BA Burecas, the character that transformed Mr T from being the bad guy in Rocky 3 to a generic bad boy. Yet with all due respect, no one had ever assumed The A-Team was anything more than mediocre TV; the main reason why it achieved the popularity it had at its peak was to do with the lack of competition. In today’s contents filled world of hundreds of channels as well as the Internets I doubt a series like The A-Team would have survived five seasons. Yet the studios decided to revive the formula for a cinematic escapade and even brought some new familiar faces to fill in the familiar characters’ shoes: Liam Neeson plays Hannibal Smith while Face and Murdoch of yonder have been relegated to cameos.
For the story, the film version decided to focus on the background. Every TV episode started by telling us The A-Team is a group of professional soldiers hunted by the law for a crime they didn’t commit, but never bothered telling us how these soldiers got together and why they are chased by the authorities. Well, with the film you get your chance to fill this gap up, so just switch your brains off for a couple of hours and relax. You'll be taken for an action packed gathering of characters in Mexico, from which you will travel to the battlefields of Iraq and eventually go on a Trans Atlantic adventure featuring our heroes chasing after both a bunch of dollar bill forgers and their reputation. Exaggerated action scenes are all around and our heroes always survive in one piece, so there really is no reason to worry.
It is this lack of worrying that is the bane of The A-Team. It’s nice silly action and all, but it’s hard to get involved and to feel like you care for the characters whose personal back stories are pretty meaningless. As meaningless as the dilemma the new B.A. Baracus faces with his decision to become a pacifist. I strongly suspect that for those who did not grow on The A-Team the story is even worse.
Best scene: The A-Team flies a tank. They even land it safely, at least by the movie’s reckoning (obviously, the fact they crash on water instead of land means we have no reason to expect them in anything other than top shape).
Technical assessment:
This Blu-ray comes equipped with an extended edition, which is the one we watched. I suspect (but I’m not sure) the extensions come in the shape of the leading characters performing silly improvisations.
As for the Blu-ray’s performance, this one is a top notch performer. The picture, although of high contrast, is excellent. The sound is exactly what you would expect from an American action film with too much money on its hands.
Overall: I suspect we won’t have five seasons of this one to go through. It’s fun but not much more than that so I’ll be harsh and give it only 2.5 out of 5 stars.
Posted by Moshe Reuveni at 11/04/2010 01:29:00 pm
Email ThisBlogThis!Share to TwitterShare to FacebookShare to Pinterest
Labels: Film