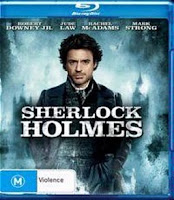 Lowdown: Holmes and Watson’s reincarnate on the big screen to fight a nemesis with supernatural powers.
Review:
The new Sherlock Holmes film is all about names. First there’s the director, Guy Ritchie (RocknRolla), with his distinctive aggressive style. Then there are the lead actors, Robert Downey Jr. and Jude Law, quality actors in the lead roles of Holmes and Watson: with such high calibre names you can rightly expect them to be the main event, and indeed the film revolves around the almost homoerotic relationship between the two. Even if given the mainstream target audience we only have hints to work with on the homoerotic front. Last, we have the legend of Sherlock Holmes that the film needs to live up to. Sadly, that last part of the equation is poorly fulfilled, taking the whole film down.
The plot is virtually irrelevant. A villain with seemingly supernatural powers (Mark Strong, an actor seeming to specialize in being the baddie) involves our heroes in a plot filled with mysticism, occult and dead bodies. As the good detective and co hunt him down they find themselves involved in a collection of action scenes that are nothing special other than their Victorian England setting but are pretty entertaining in that over reliant on CGI kind of way. The links between the action scenes form the rest of the film, and here we have ourselves a pathetic collection of meaningless stuff that artificially progress the plot. This progrss is mostly achieved by pitting our two homo lovers with women on either side and seeing how their relationship can manage the stress.
Couple the poor plot with having to live up to the Sherlock Holmes name by having Downie able to guess what someone ate for lunch that Monday forty two years ago to the day just by looking at their little finger and you get yourself a silly film where you don’t need to have your brain switched on; if you do, you’ll run the risk of realizing things don’t make sense.
Trademark scene: Holmes planning his boxing moves on his opponents in his head, in slow motion, then goes ahead to execute them perfectly. Very Guy Ritchie, very unrealistic in the sense that plans hardly never materialize so perfectly. Not even for Sherlock Holmes.
Disappointing scene: At the end, when Holmes tells you how he figured out the multitude mysteries the film holds up its sleeve. They all come down to either silly resolutions or things you could have never figured out yourself because you didn’t have the info. Compare that with the end of Sixth Sense, when you realize the “truth” was right in front of you the whole time, and you’ll realize why Sherlock Holmes is a failure of a film.
Worst scene: The way things are set up for a potential sequel is just pathetic. Can't a film be a proper film anymore, with a beginning and an end?
Technical assessment: The picture on this Blu-ray is good, but perhaps too good for the too obvious CGI and blue screen effects. Then again, there are scenes where some graininess are evident and others where colors are unrealistic. Sound is typical Guy Ritchie: aggressive, which is pretty good – makes you proud of the money you put into that surround system – but not audiophile grade in the quality of the sound coming through.
Overall: Fun, but totally forgettable. 2.5 out of 5 stars.
Posted by Moshe Reuveni at 10/02/2010 08:49:00 pm
Email ThisBlogThis!Share to TwitterShare to FacebookShare to Pinterest
Labels: Film