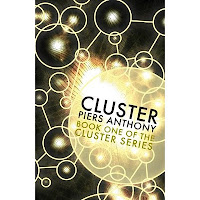 Lowdown: A Stone Age man plays a crucial part in an intergalactic war.
Review:
Piers Anthony’s Cluster series of books has been one of my favorite reads during my early teens. Although I only read the first two of this nine book fantasy/science fiction series (at the time only those were translated to Hebrew), the two had captured my imagination with their tales of intergalactic adventures mixed with lots of sex. For years now I have been trying to recreate those good old times by putting my hands on Cluster (book one of the series) once again; it saw it a part of my quest to identify fantasy books worth my limited reading time. Only recently the series was re-released for the Kindle ebook reader, allowing me to quickly jump on board. The question in my head was, can this book that I read so long ago still excite me? Is it as good as I remember it to be?
Cluster is set in a world that is somewhat science fiction and somewhat fantastic. In the future, humans and aliens expand their civilization through interstellar travel. However, due to the cost of travelling far, the further you go from the center of your civilization the more primitive you become. Thus as human colonies get away from earth they regress to Elizabethan times and even Stone Age times. Unlike the Milky Way galaxy’s civilizations, the ones in Andromeda managed to keep their colonies up to date through massive energy expenses; running out of energy, they now turn to rob the Milky Way out of its own. Yet the Milky Way has a hope, because all living things have a Kirilian field around them (what most people would regularly refer to as a soul), and that field can travel through space into new bodily hosts relatively easily. Through Kirilian travel, the Milky Way galaxy can unite to fight its stronger neighbour; but for Kirilian travel to work you need entities with high Kirilian potency, and the Milky Way’s most potent entity happens to be a human Stone Age hunter called Flint.
Can Flint overcome his humble beginnings and spread the word of Kirilian technology to the galaxy in time to unite it? Well, read Cluster to find out through its account of Flint’s encounters with the culture and the physique of numerous entities, some human and some very not human, around the galaxy.
At its core, Cluster works at a similar level to Edgar Rice Burroughs’s John Carter adventures on Mars. A human, and an ignorant human at that, goes off to exotic worlds to have exotic and pretty thrilling adventures. He (Flint) risks life and limb, is close to failure most of the time – failure that would sentence the whole galaxy to doom – but he tends to prevail and score (as in sex wise).
Stories of high adventures and sexual conquests are nice and entertaining, but they’re not enough to make a good book by my current reckoning. Piers Anthony helps by providing detailed accounts on how alien civilizations work, including on how their sex life is managed. By providing plausible science fiction like accounts, Anthony renders the book a much more interesting read than your average pulp. Added to that are some ethical dilemmas Flint is facing in each of his adventures, dilemmas through which he learns as he progresses. The most interesting of those is what turns out to be a discussion on the ethics of rape, hardly a matter for light discussion. On the negative side, Anthony introduces Tarot card reading as a crucial element to the plot, which I have found to be rather annoying.
There was another surprising source of annoyance with Cluster. The book was filled with typos and editorial mistakes to the point I was considering asking Amazon for my money back. The worst was a drawing that was replaced with the caption “image is missing” that I’m used to encountering at my office's censored Internet connection but did not expect at an ebook I payed $12 for. However, those issues were explained by Anthony’s own notes at the Cluster’s ending: Apparently, he chose to retype the entire book for its electronic release, redoing the pictures as he went along. It’s his choice to make, but he could have hired an editor to help with quality control…
Overall: The glory of days gone by still affects my appreciation of Cluster. Although it’s nothing special compared to the top of the crop in science fiction and fantasy I will be generous and give it 3.5 out of 5 stars. A book that pulls me in after so many years deserves something in return.
Posted by Moshe Reuveni at 10/18/2010 11:31:00 pm
Email ThisBlogThis!Share to TwitterShare to FacebookShare to Pinterest
Labels: Book