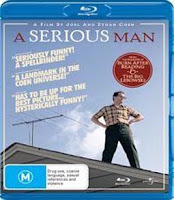 Lowdown: Real life hardships befall a Jewish guy living in Mid Western USA during the sixties.
Review:
The Coen brothers might have won their Oscars with the thriller No Country for Old Men, but their reputation has been built firmly on the grounds of their movies about rather silly yet authentic people in rather silly circumstances (as per Burn After Reading). In A Serious Man they revisit these root themes and even more so than before: not only are they revisiting the theme of silliness, they also visit their personal roots. Being raised as Jews, the Coens have now produced a film on Jews that is soaked to the brim with Jewish culture - so much so that I have doubts on the ability of those unfamiliar with Jewish culture to get through the film. On the other hand, that may not matter much because A Serious Man is far from being a serious film; then again, I'm getting ahead of myself here...
The film starts with a short scene detached from everything that follows. Set in 19th century Eastern Europe, we visit a Jewish family being visited by an old rabbi who appears to be possessed. The scene speaks Yidhish, and it marks the first point in the film where you ask yourself "what the fuck?" or just "what did this have to do with that?"
Then we cut to the rest of the film, which takes place during the sixties at a Mid West location in the USA. Our main character is a Jewish university professor (Michael Stuhlbarg) who seems to have a collection of tragedies fall on him: his wife wants a divorce because she's seeing a friend of his, his son is busy doing all sorts of irrelevant things and focuses on TV reception instead of studying for his upcoming Bar Mitzvah, a sick relative is staying with him and makes life a bit harder, and a Korean student of his is trying to bribe the professor so he doesn't fail him in his studies. Nothing here is particularly unusual or extreme, but our professor is driven to extremes in typical Coen fashion. He seeks help with Jewish sages, but wherever he goes he fails to find adequate answers.
Not that I managed to find an adequate answer to the question of what were the Coens trying to say to me in A Serious Man. The film just seems to be a collection of mundane situations driven to be perceived as extreme coupled with sessions of failing to find answers to explain these extreme situations with. Is there a point to it all, other than to have an opportunity to smear viewers with Jewish acronyms and give us a parade of actors with particularly big noses? I don't think so. The result is a very fragmented cinematic experience that is highly forgettable.
Best scene:
Our hero's teen son is having his Bar Mitzvah in front of a full synagogue crowd while being totally stoned. The scene is funny but only mildly so; nothing in A Serious Man gets to the totally hilarious level. Yet the scene is undeniably the film's crescendo.
On a personal note, I liked this scene for a very mundane reason: The Torah passage our Bar Mitzvah boy gets to read is the same as the one I read out loud in my own Bar Mitzvah. I wasn't stoned at the time, although in retrospect I consider having a Bar Mitzvah one of the more foolish things I ever got to do by choice. It seems I have a lot in common with the Coens.
Technical assessment: An average Blu-ray with rather too subdued sound, although the picture does do justice to the very sixties like sets and shows them in all their glory.
Overall: Occasionally funny, but most of the time I was bewildered as to what the film was trying to tell me. It seems to come down to a rather indirect way of telling me that shit happens for no particular reason, and I don't think that deserves more than 2 out of 5 stars; I know that very well already, thanks. Not the Coens' best.
Posted by Moshe Reuveni at 9/02/2010 01:58:00 pm
Email ThisBlogThis!Share to TwitterShare to FacebookShare to Pinterest
Labels: Film

I can't help comparing A Serious Man to stories of Jewish East European culture. In particular, Shai Agnon's (http://en.wikipedia.org/wiki/Shmuel_Yosef_Agnon) "And the Crooked Shall Be Made Straight" which we studied in high school.
Both stories tell of the downfall of a person that failed the test of the righteous and did minor bad things or overlooked stuff he should have done something about. This corresponds to the Jewish theme of life being a constant test.
In this regard, you can regard A Serious Man as a modern take on Jewish folklore. On my part I can say I used to regard Agnon as pretty boring, but that's probably more to do with the way it was taught at school.