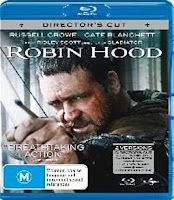 Lowdown: Circumstances place an ordinary person in a position to protect the rights of all those deprived of rights.
Review:
I was very curious about this latest reboot on the Robin Hood theme. First, because it was made by Ridley Scott, a director I generally look up to. Second, because it stars Russell Crowe, who happens to be one of the best actors by my book. Third, because although the two have collaborated several times before, Robin Hood is the closest thing to their most successful collaboration, Gladiator. But fourth, and most importantly in the curiosity arousal arena, is the feedback I have heard of the film and its contradictory nature: on one hand, the majority of reviewers said this Robin Hood is boring as, with a script intending to make people talk rather than fight; on the other I heard from loud and generally reliable sources feedback on the film being smart. So what do I make of it?
Plot wise, this Robin Hood is the most eccentric of all the previous Robin Hoods I have bumped into thus far. Crowe portrays a crusader ("Robin Longstride") on his way back home (England) after ten years of fighting that robbed him of any sense of idealism he might have had. So much so that his king - Richard the Lionheart - imprisons him. But Richard dies sacking yet another French fortress on his way back to his throne in England, Robin escapes, and through a set of coincidences Robin finds himself assuming the identity of a dead knight and returning the crown to London. The plot thickens at this point: Robin finds himself assuming the knight's identity longer than he would wish for, at the request of the knight father (Max von Sydow) and his widow, Marion (Cate Blanchett); the new power hungry king, John, is looking to collect taxes from his barons, more than they are willing to pay; and the French conspire to "assist" John to collect those taxes in order to set the barons against their king and allow them a comfortable French invasion to England. And on whose shoulders lies the burden of sorting the whole mess out? You guessed it.
The critics are right: indeed, this new take on the Robin Hood story is heavier on the talk side than it is on the adventure side. I, however, saw no wrong with that: despite the lengthy ongoings (we watched the Director's Cut at more than two and a half hours) I was never bored; instead I found myself satisfied when the action broke through, because it didn't feel like it was action for the sake of having action and it didn't feel [too] unrealistic. To put it another way, Robin Hood felt like an epic, ala Braveheart; perhaps not the most exciting epic ever, but an epic nevertheless.
Like most good epics, Robin Hood holds out a proper agenda under its belt. At first, with the scenes of crusades' dissolution, it felt like this is going to be yet another Kingdom of Heaven like agenda where we are told that the West can and should be able to live peacefully with Islam instead of either side trying to kill one another. That quickly changes and you realize the film aims much higher: it fights for the rights of every deprived person out there, from women to any of the earth's other oppressed peoples. While doing so, Robin Hood assumes much freedom in its interpretation of true historical events (e.g., the Magna Carta), which is cause of some distraction. It all feels slightly disjointed, as if the film takes on more than it can chew, but as long as you're of liberal tendencies and believe in the rights of the individual you should not complain at yet another film where Scott is openly criticizing the way our society is allowed to run.
It's not only Scott's agendas that I liked; I also liked the way he directed the film. Action is shot properly, in that unfashionable manner that actually allows you to understand what is going on and does not make you seasick. Along with top notch production values, Robin Hood is a pleasure to watch.
Interesting scene: The French gather up villagers in a house and set it aflame while, at the same time, Robin & Co are having progressive discussions on liberating humanity. Sorry, but the first is probably a much better representative of the way the 12th century was like than the latter. It is this obvious contrast, though, that makes you think of Scott's message: indeed, it passes the message through, yet I would have preferred smoother delivery.
Technical assessment: I like the picture on this Blu-ray a lot; it just felt so real. The sound was good, too, although not as aggressive as it could have been (thus perhaps matching the overall feel of the film). One thing I will criticize this Blu-ray about is its relative lack of supplementaries: I really wanted to learn more about this magnificent production but the info just wasn't there. What was there, though, were trailers that downloaded from the Internet as we placed the disk inside our PlayStation 3, significantly delaying us from watching the film. It seems the studios are hell bent on sending us viewers towards piracy.
Overall: Put me in the minority ranks when I say I liked this new and weird Robin Hood a lot, 4 out of 5 stars much (some generosity won't harm me here). If anything, Robin Hood made me want to re-watch Kingdom of Heaven.
Posted by Moshe Reuveni at 9/25/2010 03:43:00 pm
Email ThisBlogThis!Share to TwitterShare to FacebookShare to Pinterest
Labels: Film

Another interesting point about Robin Hood is to do with its climax battle. The scenes where the French invade England are made to look a lot like the scenes of the Allies invading Normandy on D Day, only that the roles of the goodies and the baddies are reversed.