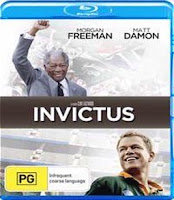 Lowdown: Nelson Mandela uses the South African rugby team to unite a new nation.
Review:
It’s been a long while since I last watched a Clint Eastwood film, so his latest release – Invictus – was very warmly welcomed. The Eastwood films where he doesn’t act tend to be less involving, but Invictus compensates by utilizing Morgan Freeman and a plot based on true events.
Freeman, who played god before, acts as one of humanity’s most cherished specimen: the recently freed Nelson Mandela who was even more recently elected as the first South African prime minister since blacks were allowed to vote. Before him is a major challenge: improve the lives of the traditionally poor and suffering blacks while not losing the hearts of the still in control whites. How can that best be achieved?
While the majority assume Mandela will strive to subdue the whites as he empowers the blacks, Mandela chooses to act in the spirit of conciliation. One major way with which he achieves conciliation is to take the South African national rugby team, a symbol of white supremacy (rugby was played by the rich whites while the poor blacks played football), and turn it into a team that stands for all South Africans. In order to achieve that, Mandela recruits the team’s captain (Matt Damon) to the cause. Luckily for the two of them, the rugby world cup is about to be hosted in South Africa in a year’s time, giving them the opportunity to make their point. Unluckily for them, South Africa starts its cup preparation as the poorest team amongst the world’s ten or so rugby power nations, rendering this one an uphill battle. The result is a very effective sports film that tells an uplifting story about humanity’s better aspects. The Age wrongly criticized Invictus for having too much rugby, but then again they can’t say anything good about a sport other than AFL; what Invictus does have a lot of, perhaps even too much of, are depictions of how people can be good to one another when circumstances allow them to act this way; Mandela provided the circumstances.
Indeed, if there is anything to say against Invictus is that it is leaning way too much towards a presentation overfilled with saccharine. Everything is just too sweet to be true. The South Africans beat the New Zealanders, considered by far the strongest team at the time, but the film does not mention that most of the New Zealand team was suffering from food poisoning. Similarly, the film misleads us to think that a planned jet flyover the rugby stadium was the whim of a supporting pilot (who was, according to the film, mistaken for a would be terrorist) while in actual fact that flyover was planned. Worse, with the exception of one seemingly forced scene where his failed marriage is briefly discussed, Mandela is portrayed way too saint like. I was annoyed by these attempt to artificially sweeten the film for the simple fact they are unnecessary: the truth was much too powerful to require help. As a direct result of this, Invictus cannot be said to rank amongst the top of Eastwood’s crop.
Best scene 1: The national rugby team goes out to a poor black slum to play/train with the kids in what turns out to be a very touching scene.
Best scene 2: During the world cup final we witness sporadic scenes of this black kid doing his best to eavesdrop on the radio coming off some white guys’ car. As the match progresses, the two contrasting factions get closer.
Technical assessment: The picture was obviously artificially aged to make things look like stock shots. The sound on this Blu-ray is uninspiring almost throughout, with the exception of key scenes (mostly from the rugby pitch) where the surrounds suddenly come to life.
Overall: A nice feel good film that could have been an inspirational one had it been made less artificial. 3.5 out of 5 stars.
Posted by Moshe Reuveni at 9/28/2010 10:10:00 pm
Email ThisBlogThis!Share to TwitterShare to FacebookShare to Pinterest
Labels: Film