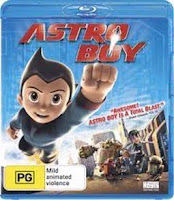 Lowdown: A robot boy searches for an identity in a world with odds stacked against him.
Review:
I have distinct childhood memories featuring Astro Boy in Arabic dubbed cartoons, the result of which was me fully expected the new feature film version of Astro Boy to be a cheesy children affair done with good animation. As often happens when I approach a film with low expectations, I found myself in for a welcoming surprise.
Astro Boy is a computer animation film taking place in a futuristic world where humanity is split between those leaving on earth – essentially a giant dump – and those living on a floating city up in the sky. The floaters are so advanced they have robots taking care of their every whim while the robots themselves are treated like we treat migrants from poorer countries (or, in Australia’s case, boat people). The floaters are able to maintain this lifestyle thanks to the genius of robot maker Dr Tenma (Nicolas Cage), who is more like a slave to the power hungry politician in charge (Donald Sutherland). When Tenma’s child dies after a military robot goes berserk he goes berserk himself and builds a super robot in the shape of his late child, Astro Boy.
Yet there is no room for Astro Boy in a city where robots are treated like boat people, so Astro Boy – equipped with rocket feet and other nifty gizmos – finds his way down to earth. There he befriends a group of children working for an outcast scientist (Nathan Lane). As the plot clearly turns into a futuristic version of Oliver Twist, our Astro Boy has to keep his good heart at bay and his robotic defenses on alert if he is to sort out his identity crisis for himself.
Astro Boy turned out to be everything that WALL-E failed to be. Set in similar worlds where consumerism, lack of care for the environment and power hungry cartels have ruined the world, with refugees sheltering in artificial and spoiled worlds, WALL-E is rather strident and preachy whereas Astro Boy has a heart. It’s funny, it’s smart, it’s charming and at a world stage where everything aimed at kids nowadays is made of computer graphics it is also original. Genuinely appealing to both adult and child, this is quality manga that remained so for the big screen.
Best scene: The film introduces us to the Peacemaker, a particularly vicious war mongering robot. I liked the way this film managed to pack some smart adult appeal in its mostly teen aimed agenda.
Technical assessment: While the animation is not up to the Pixar benchmark, the picture on this Blu-ray is excellent and the sound will rock you on many an occasion. I still don’t know why the best Blu-rays (and DVDs, for that matter) seem to be animation ones, but I can definitely enjoy them a lot.
Overall: By the time my son’s naivety in the ways of our world deteriorates enough to a level allowing him to endure what us adults calmly refer to as mild violence, Astro Boy would be a film I wouldn’t mind us watching repetitively together. 3.5 out of 5 stars.
Posted by Moshe Reuveni at 9/21/2010 10:25:00 pm
Email ThisBlogThis!Share to TwitterShare to FacebookShare to Pinterest
Labels: Film