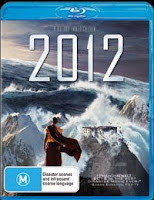 Lowdown: A dysfunctional family’s fight for survival as the world comes to an end during 2012.
Review:
Some fifteen years ago, director Roland Emmerich released one of my favourite films at the time: Independence Day. ID4 was highly entertaining with its mix of comedy, action and scenes of destruction of world famous icons. It was also pretty silly, but it knew that all along and never took itself too seriously, a quality that is badly missing from Emmerich’s latest, 2012.
2012 takes place at the end of 2012 and [mainly] follows an unsuccessful divorced writer (John Cusack), his attempts to get closer to his children, and his attempts to save them and his ex (Amanda Peet) when the world suddenly starts to fall apart all around them.
How does the world achieve such a feat all of a sudden? Aha! Ask a silly question and get a silly answer. 2012 offers an incredibly stupid mesh of bullshit made to sound like science so sophisticated there is no way mortals can understand it, plus some new age bullshit about Mayans and them predicting the end of the world during 2012 (they didn't), plus - for added flavoring - drop in every conspiracy theory out there. Even Princess Diana's death at a Parisian tunnel is included in the great conspiracy mix. The end result is pathetic, but I can see how the more ignorant amongst us could actually fall for it. What I fail to understand is how so many of the people involved with making 2012 can keep a straight face while seriously discussing the "science" behind 2012 in the film's supplementaries.
Never mind the explanations; what 2012 has on offer is special effects scenes of destruction by the ton, provided to us through the introduction of a wide collection of minor characters - most of which fail to last long. Indeed, if there is any straight word of praise I can place on 2012's cinematic qualities is that it does not hesitate to kill its characters. Quickly enough there aren't many humans left, yet we are still meant to care for our hero's family and not much else.
At about two and a half hours of length, and through the style and the calamities, it is obvious 2012 is yet another application of the same old Emmerich disaster/adventure film formula that worked for him before. The main difference is that this time around, as with The Day After Tomorrow, the film takes itself pretty seriously; while in the global warming story this may have been justified by the genuine clear and present danger at hand, 2012 has no such excuse. It manages to entertain quite a lot of the time, but for the rest of the time it is simply pathetic.
Most improbable scene: The American president is convinced the world is about to end after listening to the opinion of one scientist. Yeah, right! In real life thousands of scientists are saying global warming is man made and no one gives a shit, so it's obvious one scientist saying the world will end soon is going to be heard. Not only that, this single scientist offers no peer reviewed papers or anything; yet again the general public, ignorant in the way science works, is going to come out of a film equipped with a very twisted impression on science. And then we wonder why science is unappreciated!
Best scene: Our heroes’ last minute escape from a breaking down California is a long collection of thrilling rollercoaster special effect rides.
Worst scene: We learn that our hero’s daughter no longer needs nappies at night. Hooray! Seven billion people just died, but who cares? On the other hand, maybe there is some justification for the celebrations given there are no nappy manufacturers left in the world.
Technical assessment: Judging by the look of 2012’s picture, this film was shot in digital (as opposed to film). I can’t say I like the way digital looks in darker scenes, and the result is that even on this otherwise very good Blu-ray those scenes (mostly the water diving scenes ala Poseidon towards the end) feel like they are home video stuff. Sound wise, 2012 is beyond reproach, sporting a suitably aggressive soundtrack that fits the occasion well.
Overall: Never was the wire stretching between plausibility and entertainment stretched as much as with 2012. Ultimately, rating how good 2012 is has more to do with your preferred position along this equilibrium than the objective quality of the film itself. Me, I’ll give it a middle of the road score of 2.5 out of 5 stars.
Posted by Moshe Reuveni at 9/22/2010 10:37:00 pm
Email ThisBlogThis!Share to TwitterShare to FacebookShare to Pinterest
Labels: Film