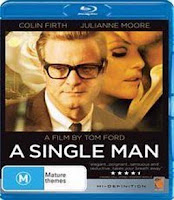 Lowdown: The last day in the life of a single gay professor.
Review:
Colin Firth is a favorite actor of mine. Sure, he stumbled when he chose to take part in the likes of What a Girl Wants, but he more than made up for it in his portrayal of the ultimate Mr Darcy (at 1995’s Pride and Prejudice). Besides, he played an Arsenal supporter in Fever Pitch; who can ask for anything more?
I can, because although it is clear the guy is talented, it is also clear he never had the platform to truly show off his talent with. Until A Single Man, that is.
Firth plays a single British gay university professor living and working in the USA during 1962 as we follow what he intends to be the last day of his life. Through a series of flashbacks we learn that his lover died at a car accident, and between them being gay and with the attitudes at the time (which are probably not that different to today’s attitudes) he wasn’t even able to say goodbye properly. He’s frustrated and sees no point in living anymore; we follow him as he nonchalantly buys bullets for the revolver he intends to use at this, the last day of his life.
Aside of the previously mentioned flashbacks, the entire film revolves around Firth’s would be last day of his life. It’s not your average last day; it’s full of events which make Firth feel more alive that day than most of the days before. The events include reminiscing with an old friend (Julianne Moore) and him getting to know a student of his that can actually think for himself. Thus, as the day rolls on, we learn more about life than death; we learn about the important things in life.
It’s interesting to note that although Firth plays a gay character, A Single Man never feels like a film about homosexuals. Homosexuality is just a tool used to further insulate the hero character at the beginning of the film, as if to magnify the effect of him living his last day to the full and coming out of his insulation.
Other than the lesson about life and the acting lesson provided to us by Firth, A Single Man stands out for its style. This one is a cinematographer’s delight, with unusual use of colors and lenses, pans and edits. The end result doesn’t feel like a film, it feels like a work of art.
Best scene: Firth waits at the bank to withdraw his possessions from his safe. Someone interrupts him, and we follow Firth's stare from his point of view as he slowly raises his eyes towards the subject of the interruption. The slowness, the style and the colors of the shot call much attention to the technique, and rightly so. It’s beautiful!
Technical assessment: I liked this Blu-ray a lot. The picture is overwhelmed with the browns that used to dominate the times the film is set in, but it also knows how to tackle the contrasts thrown at it. For a film that works at the subtle level, the sound is just great; I found it overwhelmingly good despite its lack of aggression.
Overall: An artistic creation I warmly recommend. 3.5 out of 5 stars.
Posted by Moshe Reuveni at 8/02/2010 10:28:00 pm
Email ThisBlogThis!Share to TwitterShare to FacebookShare to Pinterest
Labels: Film