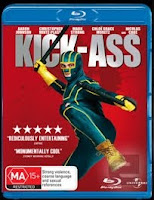 Lowdown: An average teenager decides to become a superhero and faces the consequences.
Review:
Kick-Ass is a film building on the tradition of comic based superhero cinema but with a twist: its superheroes have no supernatural abilities. Or at least that’s how things start when we’re introduced to the film’s story, told in flashback mode by its main hero: Kick-Ass.
Kick-Ass is an average New York teen with an idea. We all read, dream and watch stuff about superheroes, so why don’t we become superheroes ourselves? He takes on the challenge, buys himself a stupid looking costume over the Internet, and sets out to fight crime. Crime hits him, literally and pretty quickly, but this doesn’t deter him. Soon enough he acquires his fame through YouTube.
Gradually, things become more complicated, with gangsters and drugs joining the picture. When it seems Kick-Ass is biting more than he can chew he gets to meet another pair of natural superheroes, a father (Nicholas Cage) and his ten year old daughter. They’re the real deal who know what they’re doing; as far as the little girl is concerned, being the superhero is the only thing she knows about the world. Together, and in mysterious ways, our heroes fight the baddies to save the day and prepare us for a sequel.
Kick-Ass is quite entertaining. It’s funny, in that geek comedy type of way; and its action scenes are designed to go a step further than what we’re used to, meaning that Kick-Ass is no film for little children to watch. Between that and its message about the search for a self identity in our modern era you could be forgiven for assuming that Kick-Ass actually kicks ass as far as quality cinema is concerned.
I would disagree with you if that is what you think. The main thing one takes out of Kick-Ass is the sight of a ten year old killing baddies by the ton in ways that would make Rambo a humble pacifist. It’s all designed to shock you on the basis of letting you watch things you’ve never imagined before, but at one stage or another I stopped to think about the point of it all. Do I really want to see a ten year old behead people? Does that make me a better person? I don’t think so. Not because I’m against seeing stuff that takes me out of my comfort zone but rather because I consider it stupid to take me out of my comfort zone solely for the sake of taking me outside my comfort zone. I feel that this is the case with Kick-Ass simply because any positive thing it has to say is utterly hidden by its attempted titillation.
What started for me as quite an entertaining film ended with the feeling of deep emptiness, an emptiness only enhanced by the very strong product placement for Apple MacBooks and the MySpace website. Apple seem to have a monopoly on film good guys' computers, but does anyone use MySpace anymore?.
Best scene: Perhaps the best demonstration of what Kick-Ass is about is provided in a scene where gangsters try and get information out of a guy by putting him in a microwave oven and turning it on. As per Kick-Ass’ spirit of going where normal films don’t tend to venture, we witness the result of the cooking.
Technical assessment: Kick-Ass is one of those Blu-rays where, immediately as it starts, you sit back with joy at the reminder of just how superior Blu-ray sound can be to DVD sound. Shortly afterwards you’re annoyed at the less than impressive picture, where the struggle to maintain a high contrast look to match the comics appeal causes colors to mildly distort and the picture to be less sharp than it could have been.
Overall: I’ll be hard on this one, because I tend to think that style should not cover for emptiness. 2.5 out of 5 stars.
Posted by Moshe Reuveni at 8/27/2010 10:31:00 pm
Email ThisBlogThis!Share to TwitterShare to FacebookShare to Pinterest
Labels: Film