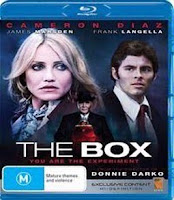 Lowdown: A struggling family offered a million dollars on the condition that someone dies.
Review:
The Box comes straight at you with a plot from one of those Tales of the Unexpected / The Twilight Zone TV programs of old. We start with a typical family that’s not doing too bad but has its struggles: the wife (Cameron Diaz) is a teacher with a limp that is told her salary is going to be cut; the husband (James Marsden) is resourceful NASA employee told that his dream of becoming an astronaut is going to stay that way – a dream.
Into the picture comes a weirdo with only half his face still in place (Frank Langella). He pops at our family’s doorstep and leaves them a box containing nothing but a button: if they press it, they’ll get a million dollars but the price is that someone they don’t know will die. What will our family choose to do? And what will the repercussions of their choice be?
As you can tell, The Box sounds promising. Style wise, there is a heavy investment here on establishing the setting at 1976: the colors, the furniture, the radio news broadcasts we get to hear, and the landing of the Viking spacecrafts on Mars. Then there is the great ethical debate opened for us explore with this whole button affair, once you overcome the obvious problem of having a button press causing someone you don’t know to die just because you pressed it.
That’s exactly where The Box’ problems start: as the movie continues to pursue the matter of the button and what’s behind it further and further, it does not let you forget that its entire premises is rather silly. It doesn’t let you do so because things slowly become sillier and sillier; quickly enough I found the anticipation I had at the beginning of the film, to be shocked and awed, turning into a “why the hell am I wasting my time on this crap”. Once all is said and done, especially after the ridiculous ending, you realize The Box is one of those films that tries to work by making you feel “deep in that spiritual level”: that is, by overwhelming you with nonsense you’re meant to feel that perhaps there is more to this universe than we can understand etc.
After watching the film I realized The Box was directed by Richard Kelly, the same guy who did Donnie Darko. I didn’t like Donnie Darko for the exact same reasons I don't like The Box, thinking it a bunch of highly stylish crap that is ultimately meaningless. The Box, it seems, is Kelly's direct sequel.
Ultimately, I was greatly disappointed with The Box. Have a think about it: the idea of a film discussing the moral issues of someone doing something for their own personal benefit without thinking twice about it and causing some mischief to another as a result is an idea that’s definitely worth delving into. It’s highly relevant, because this is exactly what happens when we take a car for a drive and emit carbon into the atmosphere, carbon that ends up causing the home of some poor family on a remote Pacific island whose name we’ve never heard of before go under water. The Box' insistence on linking the landing of a spaceship on Mars to its main affairs (to name but one example example), instead of dealing with potential ethical issues with a straight face, turns it into an annoying farce.
Badly done scene: In retrospect, even the key “should we press the button or not” scene was not made as well as it should have been. I can understand the director tyring to go for the underwhelming, but it just didn’t work.
Technical assessment: An all around average Blu-ray. No major faults but nothing that will knock you off your sofa.
Overall: If you like your bullshit in high doses then you might like this one. I don’t. 1.5 out of 5 stars.
Posted by Moshe Reuveni at 8/04/2010 09:34:00 pm
Email ThisBlogThis!Share to TwitterShare to FacebookShare to Pinterest
Labels: Film