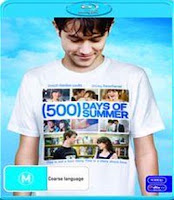 Lowdown: A guy falls for a girl who doesn’t return as much love.
Review:
Between the good things I’ve heard of (500) Days of Summer and the good opinion I have of Zooey Deschanel (as discussed here and given the release of her second She & Him album), I was looking forward to watching this one. A romantic comedy with delivered with the promise of not suffering from cheesiness is not to be trifled with!
(500) Days of Summer follows Tom (Joseph Gordon-Levitt), a young guy on his first proper job. Tom wanted to be an architect but instead ended up finding himself composing greeting cards for a greeting card company, a compromise that leaves him on the frustrated side of things. Office prospects change when Summer (Deschanel) starts to work there as his boss’ assistant. With her natural magnetism, Tom falls for Summer straight away and convinces himself that she’s the girl for him. Summer, on her side, doesn’t seem that interested. Even when they do get together, eventually, they’re not truly together; and in a reversal of common perceptions regarding relationships, it’s the boy that wants the commitment and the girl who’s afraid. What shall be the fate of this relationship?
The main thing I took out of (500) Days of Summer is it being quite a boring film to watch, and that’s saying a lot given its just a 90 minutes film. The film seems aware of this problem and tries to compensate by being hip (e.g., narration, stylish crossovers) and by constantly skipping back and forth in time, from one day in the Tom/Summer relationship chronicles to another. Hence the justification for using the title (500) Days of Summer, even if the film is still boring at its core.
(500) Days of Summer is not all doom and gloom, though. At its core it has something interesting to say, which hit a personal nerve with me. Personally, my own relationships took me through all of the various torments Tom went through in his relationship with Summer; the difference was that my experience spanned over several relationships. I’ve seen it all: the girl who couldn’t make her mind up, the girl who made her mind up one day but changed it the next, the girl who said she was shying from a commitment but went on to get married the next day, and – obviously – numerous girls who just didn’t know what they wanted. As is the case with Tom’s character in the film, in retrospect I am happy with all of these experiences because through them I learned a lot about myself as well as a lot about what it is to have a proper relationship. Since maintaining a relationship is a very hard thing to do (and in no way can I claim to be good at it – just ask my wife), one needs all the help one can get. I don’t think I would have been able to be at the point in life I currently am, happily in the best relationship I could possibly expect to have, without going through the former torments. In this respect, (500) Days of Summer is all about the gift of hindsight when it comes to relationship management.
(500) Days of Summer even goes a step further to deliver an anti fatalistic blow by claiming there is no address on the true love that’s waiting for you out there; you just have to make the most of what you have. In saying so, as in having Tom truly happy only when he follows his true self, the film pretty much echoes my own relationship lesson #1: “Be yourself no matter what they say”.
Best scene (1): Tom has a Han Solo moment when Summer finally gives him the nod and he imagines himself to be the focal point the universe for a brief while. A nice celebration of what being successfully in love feels like.
Best scene (2): Tom, the frustrated architect, refers to Alain de Botton’s Architecture of Happiness book and gives it away as a present. I didn’t like that book much, but that’s despite the book carrying some potent ideas that we should all be aware of. Overall, it’s nice to see the book receiving pop culture recognition. It's also nice to see someone other than me thinking the book serves as a good idea for a present.
Technical assessment: An above average Blu-ray, both in picture and in sound (aided there by a great collection of soundtrack songs), yet far from reference levels.
Overall: It’s nice to watch a romcom that actually has something proper to say, but why does it have to be so boring? 2.5 out of 5 stars.
Posted by Moshe Reuveni at 8/30/2010 10:50:00 pm
Email ThisBlogThis!Share to TwitterShare to FacebookShare to Pinterest
Labels: Film