Four years on and north of five hundred reviews under its belt, this blog is still going strong. This past year didn’t see to many new developments under the sun: by now we grew so accustomed to high definition as to consider it normal, which implies taking a dislike to standard definition. As for the latest buzz, 3D? I think it’s going to be a buzz for a while yet.
With that in mind, it’s time to award the best I have encountered during this blog’s fourth year with the much coveted R-Wards, the most prestigious rewards ever granted by this blog.

Best film:
We have had the pleasure of watching many good films this past year (and many bad ones, but let’s focus on the positive). Last Chance Harvey was the first film I really liked this year with its superb acting and The Boys Are Back demonstrated the distance between the truly well made films and those vying for formal recognition in the shape of Academy Awards and their likes.
With the dust settled, this past year shall be remembered as a year of rejuvenates science fiction. District 9 was clearly the best film I have watched this year (and the film I have voted for in this year’s Hugo awards), with the low budget Moon not too far behind. However, quality isn’t everything, and I’m giving my award away to Avatar. Undoubtedly, Avatar is a mediocre film, but it is also the film through which this past year will be remembered for years to come.

Best book:
Through the combined influence of friends, films and me seeking greener pastures, this year saw a bit of a comeback with my science fiction reading. Of the sci-fi I got to read this year, The Moon Is a Harsh Mistress by Robert Heinlein was the best. In fact, it is one of the better books I have ever read.
Yet I will hand the award over to The Pleasures and Sorrows of Work by Alain de Botton. The Pleasures and Sorrows of Work earns the prize for two main reasons: For a start, it was a pleasurable read from start to finish and a reminder of why I like de Botton. Second, and more importantly, it is the only book I know that deals with the basic idea of the activity I spend most of my wakeful time on – work. The fact that it is alone in the field, as well as scarily relevant, makes this one a unique read. In addition, the accompanying photos from Richard Baker are worth mentioning by their own rights. If you doubt me, think about this: does anyone really care about the stuff you do at work, in the sense of the legacy you’re leaving for generations to come? Can you really look back and say that you’re proud of what you’ve achieved? I doubt any office worker can.

Best on TV:
I cannot say this has been a good year for TV programs. We’ve watched the same recycled "good" old stuff and we became more an more frustrated with the material broadcast on commercial TV; so much so we’ve abandoned it altogether.
The light at the end of the long tunnel came from the likes of John Adams, a mini series on the life of the USA’s second president. I liked it because it didn’t try to glorify and it didn’t try to hide the ugly teeth or the poor hygiene; instead it showed the man as a human being.
Most of all, I liked a couple of smart local comedies aired by ABC. 30 Seconds was a good parody on the advertising world that, in the manner of all good parodies, actually teaches you quite a lot. My winner, though, is Lowdown, a series about a tabloid journalist and his photographer friend. It was sarcastic to the bone, providing healthy criticism on our culture and especially on our celebrity worship. A lot of my affection to Lowdown comes from it being shot in Melbourne, but it also won points through Nick Cave’s title music song, There She Goes My Beautiful World. 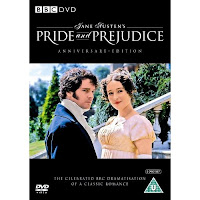 Lifetime achievement R-Ward:
If this was the year of science fiction then this was also the year Jane Austen grabbed my attention. During this year we’ve watched everything related to Austen that I could put my hands on; I even read Austen stuff even though she’s not my regular cup of tea. The selection includes:
Of the above, my favorite by far is Pride and Prejudice. The choice is obvious: it has the best “feel good” factor with a rugs to riches story that makes everyone feel like they can own a Pemberley, and its heroes are easy to identify with. Of the different Prides and Prejudices, the one I like the most - more than the original book and by quite a big margin - is the 1995 TV version featuring Colin Firth. However, to give credit where credit is due, the lifetime achievement reward for this year goes to Jane Austen.
Posted by Moshe Reuveni at 7/29/2010 01:58:00 pm
Email ThisBlogThis!Share to TwitterShare to FacebookShare to Pinterest
Labels: R-Wards