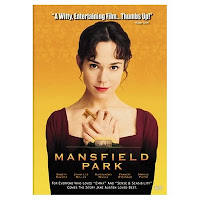 Lowdown: A lower class woman finds love in an upper class mansion.
Review:
Having liked our experience of watching two different small screen versions of the same Jane Austen, Persuasion, we now turned to perform the same ritual on what is probably Austen least familiar book: Mansfield Park. On the left hand corner we had the 1999 cinema version while on the right, viewed on the following night, was the 2007 TV version.
As one can expect, the two's plot is similar; that said, there are significant differences between the two despite their similar durations (100 and 90 minutes, roughly speaking). Given my unfamiliarity with Austen's original I cannot say which is the loyalist. Set during the early 19th century, both stories tell us of a young girl from Portsmouth called Fanny (there's a name you won't see used today), who is of a relatively lower class to Jane Austen's typical heroine. The girl's mother sends her to her aunt's much posher place, Mansfield Park, where she can lead a better life. There, however, she is second class, living in between the dramas the afflict the more affluent: a worrying paternal character busy running slave labor camps in the West Indies, an intolerant aunt and an indifferent one, spoiled female cousins who marry for the wrong reasons, and an ala Pride and Prejudice's Mr Wickham suitor that is best avoided. A ray of light is provided by Fanny's cousin Edmond, and it's hardly a secret that the two will find one another eventually so that Fanny can have the typical Jane Austen favorable heroine marriage.
Overall you get the usual Austen themes here, with the core being the heroine who has to stand up for her own feelings against authoritative pressure to marry for money. There is also an anti slavery theme, although I wonder whether this is due to the modern day interpretation or whether Austen was truly a progressive.
This time around, Austen's tale is just not as good; or perhaps I've grown used to her too repeated motifs by now. Or is it the Fanny character that is not that easy to relate to as Elizabeth Bennet? I don't know. Yet of the two versions, the 1999 one is by far the superior even though it can not be said to be particularly good.

The 1999 version feels like a soap opera. It deals with many small subplots over most of its duration, to the point it's hard to tell what exactly is going on even though you get the general gist of it. The 2007 version takes a different approach, focusing on a few of the subplots and enlarging them to give them the center stage. By doing so it provides clearer light on the characters so that instead of shades of gray they're more polarized into good vs. bad, thus making the whole affair a bit too simple. The lack of subplots also makes the newer version feel empty in comparison to its older sibling.
The acting aspect of the two versions is interesting. The guy who plays Edmond in the 1999 version, Jonny Lee Miller, also plays the character of Mr Knightley in the 2009 TV adaptation of Emma; and the guy who plays Edmond in the 2007 version plays Mr Elton in the same Emma adaptation. I have a problem with the latter which helped me dislike the 2007 version, but the question remains: Is the world short on potential Jane Austen drama actors?
Best scene: I liked the scenes in the 1999 version where Fanny goes back to her own family in Portsmouth for a while and experiences the grittier side of life. Interestingly enough, this whole bit does not exist in the 2007 version, which takes place entirely at Mansfield Park's estate.
Overall: While the 1999 version can be a good watch under certain circumstances at 2.5 stars, the 2007 version ranks at 2 out of 5 stars.

Further review notes added on 7/9/10:
I almost forgot to mention one of the worst elements of the 2007 version, which is its extensive use of hand held cameras. I simply don't get why a heroine's relaxing walk in a garden has to make me vomit as I watch her. My heart goes out to those who will watch this version on a big screen with a projector!
I have made this point before: I see no artistic gain is using such cinematography. In the case of a Jane Austen novel the lack of fit between the shooting technique and the script is just grossly obvious.
Posted by Moshe Reuveni at 7/05/2010 10:30:00 pm
Email ThisBlogThis!Share to TwitterShare to FacebookShare to Pinterest
Labels: Film, TV

I think Mansfield Park is more famous than Persuasion (maybe because there was that mini-series on channel 1), but in any case, Northanger Abbey is less well known than either.

Yes, I've seen them both, and yes, you're absolutely right. I didn't love either one, and the earlier one is a bit better than the later. One of my problems with the later one, actually, is that the girl who plays Fanny seems like she's in the wrong film. Something about her look makes her seem completely misplaced to me. It also lacked some of the seriousness that the story requires.

Again, I'll bring up the book. I have a love/hate relationship with this one. It's quite long (which is not in itself a problem), but for some reason has an underdeveloped ending. Also, part of the reason why the screen adaptations can't measure up is because Fanny is quite a loner, and a lot goes on just in her head (part of the reason why I think she writes so much in the earlier version). But it's a rich story and nicely developed. The only thing is the ending is resolved in no time, like Austen just realized she left the stove on but wanted to finish the book before checking.

Uri: My popularity appraisal of Austen's work is based solely on my exposure to Austen related memes (usually the result of whatever TV series the Aussie ABC channel is promoting). That, plus Jo claiming not to have read Mansfield Park.
I never heard of Northanger Abbey before; now I'll need to look for it.

For the record, the Austen theme will not last much longer. Ignoring Northanger Abbey, we only have Lost in Austen to watch but, generally speaking, I don't review TV series here; and then there's the Jane Austen Book Club (or something along these lines) that we'll eventually rent.