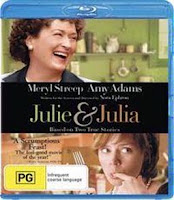 Lowdown: The parallels lives of two would be chefs living fifty years apart.
Review:
I don’t care much for cooking shows, especially not the reality cooking shows that dominate Aussie TV at the moment. Nor do I care much for the celebrity chef phenomenon, which I consider incredibly silly: you know society is sick in the head when Nigella Lawson is a common household name but no one knows the names of the two scientists that identified the problem with our ozone layer and helped humanity deal with a potentially cataclysmic event.
Not that there is nothing to learn from cooks, as Julia Child (Meryl Streep) proves in Julie & Julia (J&J), a film based on real life characters. J&J follows the adventures of Julie Powell (Amy Adams) during 2002. Powell is a frustrated government employee living in a crappy little apartment above a noisy pizzeria in New York’s Queens. In parallel we follow Julia, a frustrated housewife who is looking for a fulfilling way to spend her time while at Paris with her diplomatic husband during the nineteen fifties. Both find similar salvation: Julia gets into a prestigious French cooking school, and Julie gets the cookbook on French cooking for Americans written by our very own Julia years ago and decides to challenge herself by cooking all five hundred plus recipes in one year and blogging about it.
These decisions set the wheels in motion for the main trick up J&J’s sleeve: The two stories about Julie and Julia are interwoven to show the parallels between the two. Fifty years may separate them but, for what it’s worth, their stories are exactly the same: stories about women looking to fulfil themselves, stories about the ups and downs that come with every task worth fulfilling, and – ultimately – stories about the process of creation and its agonies. Eventually, Julia becomes a household American name with her cooking books and TV shows (at least according to the movie; I have no idea how famous she really is) while living through a happy marriage. And Julie? I don’t want to spoil the film for you.
It’s always nice to see a film with more than a passing sense of plausibility about it, even if the inevitable happy ending is usually a rarity when it comes to real life ambitions such as making a living out of writing or out of cooking. I was surprised by how much I’ve enjoyed J&J, especially given its maker - Nora Ephron – and her record of implausible and generally bad films (e.g., Bewitched, You’ve Got Mail). I suspect there are two main reasons why J&J grew on me: one is to do with the acting and the other to do with identification. I like Amy Adams and I think she’s a good actress, but she is but a pale shadow next to Streep – probably the best actress of a generation (or two). Identification wise, how can I not relate to someone setting out to write a blog and committing themselves to it despite challenges all around? Sure, no one reads my blogs while Julie became famous through hers, which raises the question of whether Hollywood can sell tickets for films telling stories of failure? I say yes they can, if they bother telling the story right.
For now, though, we have to settle with J&J. It could paint too rosy a picture and it could be too long for its own good, but it’s still a pleasure of a story to watch.
Best scene: Julie “chucks a sickie” so she could stay home and cook dinner for an interested journalist, only to be confronted later by a boss that reads her blog. There goes the dilemma most bloggers face: what can one discuss on an open blog and what should be better kept to oneself?
Technical assessment: A mediocre Blu-ray. I suspect the Julia side of the story was made to look old through the use of reddish/yeallowish colors while the Julie one was made to feel cold using bluish hues, but I just found those rather annoying. Sound wise, you could have fooled me if you told me this was a mono presentation instead of full blown DTS Master Audio.
Overall: Not without its disadvantages, but still a well told story (or two). 3.5 out of 5 stars.
Epilogue: Since watching the film I managed to put my hands on Julia Child's French cooking book. I have to say it does look like a major labor of love: this is one thick book. It also looks like your arteries won't appreciate it much, although on the other hand Julia did live to the age of 92, so maybe there is something to French cooking. What I can say, for now, is:
1. Most of the stuff seems pretty challenging to cook properly. As in, it's not in my "I know how to boil water" league.
2. I want to eat that raspberry bavaria.
Posted by Moshe Reuveni at 7/26/2010 10:16:00 pm
Email ThisBlogThis!Share to TwitterShare to FacebookShare to Pinterest
Labels: Film

We can make it together (the bavaria).

Unless it involves folding. I can't fold.

Jo says she'll flip/fold/whatever.
The question is (ignoring our small kitchen): when will we have the time to do it?

I think I have 1 or 2 evenings before I go to the con.

And probably we'll have really bad weather at least once, right?

I'm not talking about the entire book. Just the once recipe.