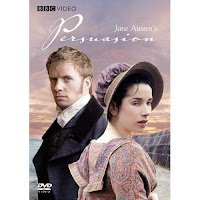 Lowdown: Years later, a woman who turned down a marriage offer deals with her second thoughts.
Introduction: Our ongoing Jane Austen festival has reached new peaks this past weekend when we conducted our own special Jane Austen study through watching two different made for TV versions of Persuasion. First was the 2007 version starring Sally Hawkins (of Happy-Go-Lucky fame), followed the night later by the DVD of the 1995 version starring Amanda Root.
Common Ground:
As you can expect, the story is the same. We follow a typical Jane Austen heroine, Anne Elliot, who is the only decent person in an upper class household governed by a rather obnoxious father. The family, we learn at the beginning, has lost its fortunes and has to lease its mansion to a naval admiral as they move to Bath and leave Anne behind. We also learn that Anne knows that admiral, for his wife's brother is a naval captain that proposed to her several years ago; at the time she was persuaded (hence the title name) to refuse because the guy had no fortunes and went to war, but since then she lived to regret missing out on her love. Especially as, in a similar manner to Pride and Prejudice's Mr Darcy becoming the attraction once his castle is visited, the subject of her love has accumulated quite a fortune in the Napoleonic wars.
Now the captain is visiting Anne's area again and the tension takes over Anne. What does he think of her? Is he falling for other girls in Anne's vicinity, or could he still be interested in her? And what about her rich cousin, who also seems to be interested in her - should she forget her captain and go for the safety he presents, or is he another Mr Wickham?
Through my description of the plot one can clearly identify repeating motifs of Austen's work: the independent rational woman living in a world of rather mindless people where a woman is simply not expected to think for herself; women's necessity to marry well in order to acquire social status; and women in general being more like spoiled goods without proper men by their side. It's a sort of a please everyone world that Austen creates, a world where conservative values are still justified but women are still encouraged to make their own world based on their own merit. Most notably, though, it's a world where people can't communicate properly with one another due to artificially imposed etiquette: were our heroes to just say what they think the entire story of Persuasion wouldn't last a minute.
As per Pride and Prejudice achievement, Persuasion's story is quite the uplifting feel good romance story, uplifting because it tells us middle classers that we can get somewhere in this world. Mind you, while Austen uses similar techniques to P&P in Persuasion, like creating mirror characters that reflect different potential courses for her heroine, Persuasion is not as exciting as P&P no wonder P&P gets most of the Austen attention.

Differences:
Having discussed the commonalities between the two versions it's now time to discuss the differences. Indeed, the differences are like night and day, literally: While the 1995 version is dark and creepy (also suffering from dreadful DVD rendering), the 2007 version is brightly lit and, despite the often dark themes, uses a brighter color pallet throughout. This is by far the most noticeable difference between the two.
The second most notable difference is the way the 2007 version relies on atmosphere to convey its message while the 1995 version relies on dialog. This manifests itself in many ways, most notably the featuring of an open mouthed Sally Hawkins at the core of the film to the point you're wondering if the entire affair is some sort of a commercial for dental treatment (her teeth are definitely not authentic early 19th century, no matter how unavailable sugar was at the time). This different attitude in telling the story leads to many other nuances: for example, the 2007 version does not bother telling us many things that the 1995 version does, such as why our hero characters chose to go to the seaside and how come they bump into familiar people there, just like that. Instead what the 2007 version does is take its characters to the extreme; everyone is either more than what the 1995 version has them to be, effectively more like contemporary movie making style but also effectively more unreal. Although I haven't read the book, it seems highly likely that the 1995 take is significantly more loyal to Austen's original.
Clarity is a bit of a plague with both versions. The 1995 version suffers from a poor DVD presentation lacking in subtitles; the 2007 version we saw featured no subtitles either, but although its dialog was [slightly] clearer it managed to totally confuse me. The heroine is sometimes called Miss Elliot and sometimes Anna, and as if to confuse things the bulk of the characters also answer to the last name of Elliot; they should have done better there.
Best scene: Hawkins running through the streets of Bath to catch her love is an exciting culmination for the 2007 version which the 1995 version misses out on. It works on me in particular because, having been to Bath, I really liked the place.
Worst scene: In a manner too similar to the American ending of the recent Pride and Prejudice film (the 2005 version starring Keira Knightley), the 2007 version of Persuasion ends with a way too cheesy an ending where the captain buys the heroine's childhood house for her and gives it to her as a surprise gift. An ending like this ruins a lot of the decency of the story up to that point.
Overall: Both versions are good and both are based on an excellent story but both are still flawed, to one extent or another; I rate them both at 3.5 out of 5 stars.
Posted by Moshe Reuveni at 6/23/2010 03:27:00 pm
Email ThisBlogThis!Share to TwitterShare to FacebookShare to Pinterest
Labels: TV

Glad you agreed with my evaluation of Hawkins. Liked her in Happy Go Lucky, though...
I should probably watch the earlier version of Persuasion sometime, based on your comments. See how it compares to the book. Oh, and the scene you called "worst" is, as you can guess, not in the book (at least, not that I can remember...) just like the gross "Mrs. Darcy" ending of the Knightly version of P&P. ::shudder::

Thanks for the tip!

I really liked your review, so I thought I'd mention it in one of my Austen things. Its always nice to find someone else obsessing with a theme like I do.:)

Having read the book I can tell you that the 1995 version is extremely accurate less a minor detail or two. I find it to be an extremely good film and think your evaluation to be poor. I am not sure if you are actualy a Jane Austen fan or not. Jane Austen books are not flashy and are about the characters. And the 'dark' nature of the film as you call it, gives it more authenticity.

Thanks for the compliment. As in, I appreciate the honesty.
For the record, I am no Austen fan, at least not in the conventional way; most of my reading is non fiction or science fiction and I only read one Austen book (zero points for guessing which one). I do, however, enjoy to see the variety of ways her material was adapted; that has been the focus of my reviews of Austen based work.

Well I agree with your evalution of the modern version. All modern versions of her book are terrible, flashy and hollywood, and not consistant with the main themes of her writting.