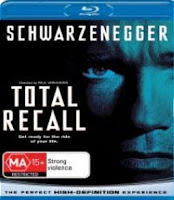 I forgot to mention just how well the action scenes are directed. There's no shaky camera, no fast editing, no erratic movements... Just good, in your face, action.

And I thought you liked T2 better.

You're right on both accounts, but:
1. Robocop: I never did really like that film. I may have watched it at the cinemas (was in at the cinema under the Cameri Theater?), but there is also the possibility I only watched it on video years later.
2. T2: Sure I like T2 better. That's exactly why I added the word serious. The argument would probably be on the criteria for separating hard core sci-fi from the rest of the sci-fi; in my view Total Recall is quite hard core whereas T2 has a few rough edges and things that don't really make sense.

If everything is a Quade dream, you can explain away any problem (gravitation, violent decompression, etc.). if not, ... Not so much.

I liked Robocop (the first one). Haven't seen in in a while, but I'm betting I'll still enjoy it.

You're obviously right.
This discussion exposed an interesting aspect in the way I treat certain films. T2 is, by a very wide margin, the film I have enjoyed the most. Blade Runner, on the other hand, is a film I consider one of the best. Am I right to make this distinction between entertaining films and quality films? Isn't the former a sign of quality by itself?