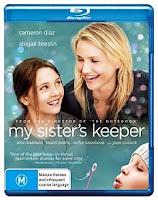 Lowdown: Conflicts within a family where a sister refuses to donate organs to her dying sibling.
Review:
I have never read Jodi Picoult and I doubt I ever will, but given the frequency I see her books being read on the train I doubt we should worry about her paying the rent. My Sister’s Keeper is a film based on a book by this American writer and it starts off with a incredibly original premises: A young daughter growing up in a loving family (Cameron Diaz is her mother) goes into the office of a big shot lawyer (Alec Baldwin) and asks for help suing her parents. What is she after? She wants her body emancipated from her parents’ control, because her parents are forcing her to donate organs to her older who is sister dying of cancer. If that’s not unique enough, we quickly learn that the donating daughter has been put into this world through a futuristic IVF process that ensured she would be compatible for organ donations as of the moment of conception. Wow! What a promising start to a film!
On paper, what we have on our hands with My Sister’s Keeper is a film discussing questions of ethics in light of futuristic scientific developments. However, despite this elaborate setup, the film settles down into a more basic question of ethics, which is how much can one person be expected to give away to another. That second discussion point is interesting and worth discussing on its own: for example, should I be spending my time writing this movie review when I could go and help the poor? However, My Sister’s Keeper goes out even a step further in its abandonment of the ethical issues at its core and turns into a character driven film of almost soap opera like qualities as the mother character grows more and more distant from the rest of the family through her belief the healthy child should stop at nothing to support the sick one.
The techniques in which My Sister’s Keeper deteriorates into a drama cheaper than the premises deserve are worth mentioning themselves. First to blame is the script, which has just too many coincidences that just happen to turn this tear dispensing drama into an even more tears dispensing drama: as the film develops we learn of more and more tragic circumstances unfolding in the family (and all the rest of the characters, for that matter), all of which are rather unlikely and thus even more unlikely when combined together.
Second to blame is the extensive use of voiceovers. In a unique manner, My Sister’s Keeper is told in first person mode through the mouths of alternating characters; thing is, since when do films get told by characters? I was under the impression films are meant to be acted, not told. If you agree to the generic assumption that voiceovers are a sign of lazy movie making then you’d have to agree My Sister’s Keeper is one of the laziest films ever made.
Also worth mentioning is the acting. My Sister’s Keeper features some big names, like the previously mentioned Baldwin & Diaz as well as Joan Cusack as the judge. None provided a performance that knocked me off my seat: The first two’s was rather too clinical, while the latter’s was a disappointment.
Disappointing scene: I was quite disappointed with the film’s climax, where all the characters’ breakdown points come to a simultaneous boiling point and we finally learn why it is that the healthy sister hates the sick sister so much she won’t donate her organs. Again, it comes down to the film’s extortion techniques: it just tries too hard to get you to cry I ended up feeling rather oblivious.
Technical assessment: A mediocre Blu-ray offering picture quality inferior to many DVDs and uninspiring sound.
Overall: I was disappointed to see what could have been a lovely science fiction film about the ethical issues facing humanity in the near future through medical advancements turned into just another drama. What could have been a great film feels more like a trashy paperback. 2.5 out of 5 stars.
Posted by Moshe Reuveni at 4/14/2010 09:32:00 pm
Email ThisBlogThis!Share to TwitterShare to FacebookShare to Pinterest
Labels: Film

The reason you didn't enjoy this movie, to my opinion is because you didn't get the point of the story. Maybe you should try to watch it again with a different point of view and understand more of it.. When you say the healthy sister hates the Kate so much she doesn't want to donate her organs... That is completely wrong, so yeah. You didn't get anything. might want to make sure you understand the point of a story before making a post like this, that is truly false.

wow that is so rude. It was a great film, your small mind clearly didn't understand it.