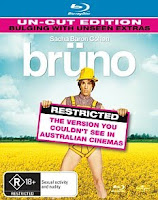 Lowdown: An ignorant gay Nazi Austrian tries for the American dream.
Review:
The success waves of 2006’s Borat! Might have ebbed by now, but that did not stop Sacha Baron Cohen from turning a third character from his late nineties’ Ali G TV show into a feature film (albeit a short one) while, for all intents and purposes, creating a good old fashioned sequel to Borat!.
What has changed? Instead of a news reporter from a –stan country we have a fashion reporter from Austria called Bruno (Baron Cohen). Bruno is pretty dumb, very gay, and seems to consider himself the next big thing to come out of Austria since Hitler. After being kicked out of the European fashion scene our hero sets out to the USA in order to become rich and famous there. It’s not only the setup that’s a carbon copy of Borat!, it’s also what happens next: Bruno interviews politicians and mingles with the general public as well as with celebrities. As we go along for the ride Sacha Baron Cohen tries to expose the best of American ignorance and bigotry on film through a combination of scripted setups and real life setups (with the edges blurred on purpose so we can't really tell which is which). The result: a mockumentary.
The question is, do the benefits of Bruno – the exposure of American ignorance – outweigh the price we have to pay for them? First I have to say I consider Sacha Baron Cohen’s efforts to be in the public benefit. Sure, they create laughter, which is a positive on its own, but by exposing ignorance and broadcasting it out to the world we can learn just how dumb we all are (given that American society mirrors Western society quite well). And it shows everywhere: it shows in the way we treat gays, the way we treat nudity, the way we idolize dumb celebrities, the overall shallow level of social discussions, racism, and much much more.
But the question was whether the benefits are worth the admission price. And the admission price is quite a hefty one: Aside of trivialities such as our time, we also have having to suffer through moments that make you cringe, moments that are just bland repetition of stuff we’ve seen before, and moments that just leave you bewildered (e.g., seeing a zoomed up dick being flung like a toy for a few good seconds). To be more specific, I don’t see the point in having the Bruno character trying to tempt some famous politician into a homosexual intercourse: sure, I have nothing against such intercourses, but that does not mean I consider watching such attempt to be a useful way for me to spend my time; these things are best left off to the bedrooms of whoever wants to take an active part, thank you very much.
Ultimately, my answer to the advantages vs. admission price relating to Bruno is a negative one. Bruno is, overall, a redundant experience, a shallow remake of its predecessor, made in a cynical attempt to grab more cash out of the milking cow. The sort of thing Baron Cohen goes against in the first place. Which leaves me wondering how, as a practicing Jew, does Baron Cohen reconcile all the things he does on the big screen with his faith?
Best scene: Bruno interviews a model who complains that walking the catwalk is hard. He agrees with her: “yes, you have to take a step with your left foot, and then a step with your right foot” (the quote is probably inaccurate but is faithful in spirit). She is happy with the unexpected sympathy, confirming with a glowing yes her falling into Baron Cohen’s trap.
Technical assessment: Below average to average, but then again you know not to expect Blu-ray reference material here given the live documentary style.
Overall: A redundant affair lying in the limbo between 2 to 2.5 stars out of 5.
Posted by Moshe Reuveni at 4/12/2010 10:21:00 pm
Email ThisBlogThis!Share to TwitterShare to FacebookShare to Pinterest
Labels: Film