The Battle of Red Cliff 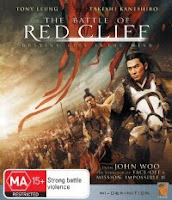 Lowdown: Massive battles between the power crazy and the peaceful in ancient China.
Review:
John Woo is a director far from his peak but I still like to give him credit for old times’ sake, which is why I wanted to watch The Battle of Red Cliff (henceforth just Red Cliff). That, and the promise of mighty CGI supported battles of the type I was sensitive to long before Braveheart turned them into pop culture.
Despite the Aussie version of Red Cliff being rumored to be but a pale short shadow of the original Chinese version in length, Red Cliff is still a two and a half hours long film. Set in ancient china and speaking Chinese (as such films ought to be), it tells a story based on historical facts about a Chinese Prime Minister seeking to accumulate power to allow him to get rid of the Emperor which he controls like a puppet on a string. Successful in his endeavors thus far, our PM sets his sights on the peaceful south of China as his next conquest. He has two things standing in his favor: the massive imperial army and the fact the southerners are busier taking care of their refugees – so as to prevent them from being slaughtered – than fighting him back. But fight they will, and the showdown will take place at a bay called Red Cliff.
What you get with Red Cliff is typical John Woo orchestrated action: zooms, quick editing, bullet (or rather, arrow) cameras, and doves. A lot of tricks that call the viewer's attention to the camera, but still - a lot of directors could use a lesson or two with Woo on how to create a flashy fight scene without the audience losing track of what’s going on and without pushing the audience’s vomit instinct too far.
Red Cliff delivers its manifest by focusing on the key characters leading each side of the war. Some of them are depicted to have virtual super powers, other are strategists and there are even the token women. Most are portrayed by faces familiar to me from Chinese martial arts films (e.g., Tony Leung). I did find it hard to keep track of who's who, but that was mostly because after a short while the fight scenes become too repetitive and you can't tell one from the other. John Woo may do flashy action, but he sure lost his originality years ago.
If you wish to summarize Red Cliff, you will call it a collection of massive big scale fight scenes + a collection of martial arts fight scenes (of the type where ropes holding the main characters are pretty dominant). Add that to the setting and the placing of a beautiful woman at the core of the dispute and the conclusion is imminent: Red Cliff is a Chinese remake of Troy.
Indeed, Red Cliff shares more than the plot with Troy – the two also share cinematic qualities. Both films provide beautiful vistas and impressive battles, both feature too much CGI for their own good, and while both entertain the two will leave you feeling a bit empty at the end. As in, after all was said and done, what was the point?
Silliest scene: The good general releases a dove that our camera tracks straight from behind while it flies across the Red Cliff bay and to the arms of an awaiting spy. I guess John Woo had to come up with a way to insert doves into his film, so he chose this.
Technical assessment: This Blu-ray features a beautiful picture that made me wonder whether Woo feels like he needs to prove himself against the compatriot likes of House of Flying Daggers. The sound is also quite good but it's hampered by the too obvious use of ADR that sounds very detached from the rest of the film.
Overall: I’m a sucker for big battle movies so I’m giving Red Cliff 3.5 out of 5 stars even though it is less gripping than it should have been.
Posted by Moshe Reuveni at 4/27/2010 09:41:00 pm
Email ThisBlogThis!Share to TwitterShare to FacebookShare to Pinterest
Labels: Film