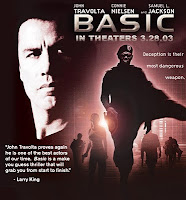 Lowdown: The military investigates a shooting incident inside a training commando team.
Review:
Some fifteen years ago I would have told you that between Die Hard and Last Action Hero, director John McTiernan is one of my favorite directors. Since then we haven’t heard much from McTiernan and my taste has matured enough for my enthusiasm to wane. However, it was McTiernan’s signature over 2003’s Basic that made me record it on my PVR. A move I learned to regret while watching the film.
Reuniting John Travolta and Samuel L. Jackson’s glory days from Pulp Fiction, Basic is yet another Rashômon style film that fails to live up to the original’s standards. A shooting takes place inside a training American army commando unit under Jackson’s command, with some casualties involved. Connie Nielsen heads the investigations, but [because she’s just a good looking woman?] she’s assigned the help of a cop under corruption investigation who happens to be an ex commando himself – Travolta. Together they interrogate the survivors and win us different flashback versions of what really took place as the mystery unfolds.
Wrapped up in lots of macho moments where characters move from one extreme to another for no particular reason, this take on Rashomon is nothing more than a collective attempt to repeatedly try and surprise the viewer. It works to one extent (the end is so weird it is unexpected), but most of the time it’s a predictable pile of cliches: Travolta is essentially reprising his role in The General's Daughter and you just know from the start the real culprit is in the army’s higher chain of command.
Unlike Rashomon, there is nothing you can take from Basic that will inspire you to think; you would be curious to know how it all ends, but throughout the film you’d feel like you’re just wasting your time. For a film that doesn’t rely on action the dominating drama is so pathetic you might just start laughing.
Worst scene: Travolta lights a cigarette. Why do the filmmakers think this is necessary to inspire an image of toughness? I know this is not the first film to feature smoking, but it's definitely one where smoking takes a major role in character development (given the lack of everything else). It's also one the film could have done without.
Overall: It’s bad but it’s not pathetically stupid, so I’ll be generous and give Basic 2 out of 5 stars.
Posted by Moshe Reuveni at 4/23/2010 11:39:00 pm
Email ThisBlogThis!Share to TwitterShare to FacebookShare to Pinterest
Labels: Film