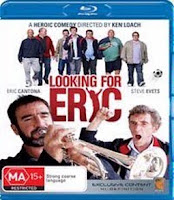 Lowdown: Eric Cantona provides a guy going out of his mind with inspiration.
Review:
I am not a Manchester United supporter but I like football. During the early nineties, though, I actually was – to one extent or another – a Manchester United supporter, and one of the main reasons for that was a French player called Eric Cantona. He was good but not incredibly good (for example, he never made it to the French national team); but he was flamboyant, he was charismatic, and he was incredibly exciting to watch. Especially when he high kicked a spectator, and especially when he made his comeback from the inevitable detention almost a year later. There is no doubt about it: Cantona was a major drawcard for the world of football. Following his retirement, Cantona has been using his name to promote his aspiring acting career: I first met him on the big screen in Shakespeare in Love.
And now Cantona has drawn me to watch Looking for Eric, a film in which he plays himself. Directed by the British director Ken Loach, Looking for Eric is a film in love with football. Shot in Manchester and focusing on a group of Manchester United supporters, it is a story of how football can inspire people to make the most of their lives even if their circumstances are tough (well, for a start, they do live in Manchester).
Specifically, we follow a guy called Eric (portrayed by Steve Evets). Aside of being a Manchester United supporter nothing seems to be going right in Eric's life. At the point of us joining him he suffers mental illness and drives through traffic the wrong way; we later learn he broke up with his first wife, the daughter he has from this marriage relies on him for help, his second wife left him seven years ago, and he's living with two step sons from his second wife – neither of which are his and both of which don't give a damn about him as they go on their bad ways.
It becomes obvious to Eric that he needs to take control over his life or his life would be over. But how can one take control over a life so miserable? Into the picture steps another Eric, Eric Cantona. The real Eric Cantona plays the real Eric Cantona! He's just an illusion Eric brings up while smoking pot, but through football analogies and stories about Cantona's life – stories like him learning to play the trumpet (which he plays awfully) while forced out of play – Cantona inspires Eric. So much so that when things get even worse with one of the stepsons getting involved in big time crime, Cantona takes on a special form as the goodies beat the baddies.
Overall, Looking for Eric is a very funny drama. Cantona provides the inspiration but never takes himself too seriously, and even though the situation seems dire and you feel for Eric's character the film is made in such a way that you don't feel a burden on your chest but rather feel optimistic.
If there is anything to take from Looking for Eric, apart of the love of football, it's the message on how friendship and being there to help others as well as receiving help from others is the peak of one's life. As Cantona says in first person, he considers the peak of his career not to be a goal but rather a pass. Now, how can anyone not adore this person?
Best scene: Eric and his friends sit together to conduct a self help therapy session borrowed from an off the shelf self-help book. Seeing those men that are used to heavily masculine ways of referring to themselves “stoop” to perform the self-help crap, yet manage to do so quite effectively, is what I call excellent comedy.
Technical assessment: Not a bad Blu-ray at all for a film that was obviously made on a tight budget. The sound in particular is well designed: nothing spectacular, but it knows how to peak at key moments.
Overall: I’ll be kind on the Erics and give this funny feel good film 4 out of 5 stars, while adding that I highly recommend it for anyone who wants to sit and enjoy themselves with the company of a good film.
Posted by Moshe Reuveni at 3/30/2010 10:59:00 pm
Email ThisBlogThis!Share to TwitterShare to FacebookShare to Pinterest
Labels: Film