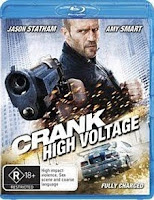 Lowdown: Grand Theft Auto on film.
Review:
If you thought the first Crank film was on the extreme side of things, wait till you see its sequel, Crank High Voltage (CHV).
As with the first film, CHV doesn’t take itself too seriously. It starts with the hero character, portrayed by Jason Statham, falling off a plane in a scene that mixes real life shots with eighties’ computer games like graphics, as if telling you that what you’re about to see is more like a computer game than a film. Next thing we know, Statham – who is still surprisingly alive and in one piece despite the fall – is in a makeshift operation room where he’s watching as his heart is taken out and replaced with a mechanical heart.
The rest of the film is spent through a philosophical discussion involving a Statham trying to figure out what happened to his heart and how to retrieve it. We’re never really told why a replacement heart was put in place, but what we do quickly learn about are the restriction this heart involves: it’s got a very poor battery that doesn’t allow for strenuous action. It doesn’t have much of a longevity either, but what it does allow for is recharging through some ingenious ways (many of which are explored throughout Statham’s journey).
The result? A ridiculously silly, action filled film (of the typical Statham genre) where the most impossible always tends to happen. The trick is in the wildly outrageous premises leading to wildly outrageous scenarios that are all exploited in the most politically incorrect fashion ever thought of by a mainstream Hollywood release. CHV is filled with racism, sexual chauvinism, porn culture references, nudity and many other things that normal films stray out of because they’re taboo: things like making jokes at the disabled or having sex with an old woman (or, for what it’s worth, a repeat public sex scene mirroring the one from the first Crank).
It’s all incredibly silly but it’s all highly entertaining. Whenever the plot seems stuck we get another past friend to come and save Statham, and whenever there’s a peak scene (e.g., a boss fight) we get additional hints thrown at us to tell us this film is just one big joke. The best example is a fight scene that switches into an old Japanese Godzilla like remake.
Best scene: As with the first Crank, there are many candidates for best scene in CHV. The easiest example is when Statham has no choice for recharging his heart’s battery other than mechanical friction, which sends him rubbing against strange people (and, eventually, having full on sex). However, my pick ends up going to a scene where a stripper gets shot in the breast: she’s relatively unharmed as we see the silicon pouring out. That scene is probably the best conveyer for what CHV is all about.
Technical assessment: The high contrast picture on this Blu-ray is somewhat lacking in detail. The sound is quite aggressive, as expected by the genre; it’s good but it’s not articulated enough to stand out.
Overall: An incredibly silly yet highly entertaining 3 out of 5 stars film. I am, however, seriously tempted to credit it with 3.5 stars: films that go out against the politically correct conventions deserve a big bonus.
Posted by Moshe Reuveni at 3/05/2010 10:36:00 pm
Email ThisBlogThis!Share to TwitterShare to FacebookShare to Pinterest
Labels: Film