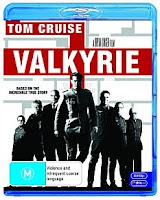 Lowdown: The story of a German plot to take Hitler down and end World War II.
Review:
Valkyrie is all about how certain things we hold true are potentially wrong. For example, director Bryan Singer: After The Usual Suspects I thought he was a genius, but since then he went out of his way to prove me wrong (e.g., Superman Returns). Or Tom Cruise: The guy may have done some nice films in his life (e.g., The Last Samurai or Minority Report), but the guy’s obviously a nut case. Or take the belief that all Germans during World War II were Nazis, a belief Valkyrie aims to prove wrong.
So, how do Singer and Cruise go about breaking the myth that all Germans were evil? Simple: they provide an example for a good German. Their case in point is one Colonel Claus von Stauffenberg, portrayed by Tom Cruise. We meet him fighting the Allies in North Africa and already plotting to get rid of Hitler and end the war, but then he gets severely injured. Recovered, and now serving in German headquarters, we meet him again; this time he joins another group of fellow plotters that has a plan which he leads: get rid of Hitler and the SS by invoking the emergency order called Valkyrie, which calls on reserve troops to secure control of Berlin. And the best excuse for triggering this Valkyrie operation is killing Hitler.
Which is what Cruise & Co set out to do in a plot that everyone studying their World War II should know about: a bomb was smuggled into Hitler's command room, but Hitler was saved by his thick desk and the plot failed. Essentially, the film Valkyrie recounts in a very intense manner the details of the failed assassination attempt and its follow-up, which included a coup that had a bright and promising start before it was overtaken by the Nazis and the war was allowed to go on.
Two things stand in favor of Valkyrie: As I said, it's thrilling and intense; and then there's the strong cast, made mostly of big time English talent like Kenneth Branagh, Bill Nighy and Tom Wilkinson. The rest of the cast is made of people from the film Black Book. Interestingly enough, all the characters in the film - regardless of their actors' nationalities - are German. You never see the face of "the enemy".
The things that go against Valkyrie are the fact that we all know the obvious ending, which terribly spoils the fun and makes you just wait for things that go wrong. That, and the too commercial approach Singer took in directing the film; it manifests itself mostly in Cruise's character being just too good to be true. A man so perfect he's ever so flawless. A man that never existed and could have never existed. You watch Valkyrie and you think all these good characters were ever so good, but the reality is slightly different: Romel, for example, who was in this plot, was not exactly famous for making the Allies life easy. These people were not happy with Hitler, true, but they still fought very hard for their country - right or wrong.
As for Cruise himself: well, surrounded by the likes of Wilkinson, he does appear rather talentless.
Worst scene: Cruise and his family spend the night in a bomb shelter as the Allies bomb Germany, but Cruise is completely unphased. Unnaturally so.
Best scene: Nighy forced to issue order Valkyrie despite his inherent fear. Now, that's fine acting.
Technical assessment: A very slick Blu-ray that's good but not that good. The picture is sacrificed on the altar of giving Valkyrie that famous "World War II" look.
Overall: I was expecting an action thriller but ended up getting a thrilling drama. A good one at that, even though it's still flawed. 3.5 out of 5 stars.
Posted by Moshe Reuveni at 2/10/2010 10:42:00 pm
Email ThisBlogThis!Share to TwitterShare to FacebookShare to Pinterest
Labels: Film