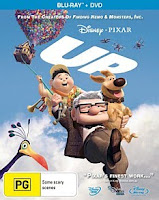 Lowdown: An old man re-learns what matters in life through an adventure featuring a flying house an a pain of a kid.
Review:
With WALL-E being the complete and utter disappointment it was, one cannot blame us for not rushing to watch Up - Pixar's subsequent release - the moment it became available. Ultimately, it was the promise of 3D that got us to rent Up, thus leaving us disappointed even before we started watching the film: Turns out Up's Blu-ray disc does not feature a 3D version despite the film being a 3D release at the cinemas. If Coraline can do it, why can't the multimillionaires at Pixar?
So yes, Up is yet another CGI animation film from Pixar that's aiming at the child level but could prove lethal to adults just the same if not more. Its hero is an adult, or rather an old [retired] guy: Carl, we learn, used to be a child with a great sense of wonder. He got married to a childhood sweetheart with similar aspirations, but circumstances prevented them from boldly going where no man has gone before and instead they lived their lives rather ordinarily yet happily in each other's arms. That was the exposition; the next thing we know the wife is dead, and Carl is on his own in his house, a refugee in the middle of a huge construction site. He still aspires to fulfil his and his wife's childhood dreams, though.
An incident happens and Carl is forced to leave his and his wife's house to a retirement home. Leave the house? Over his dead body. Carl inflates a multitude of colorful balloons, attaches them to his house, and sets of flying to conquer old demons and explore some mysterious falls in South America. Only that something has gone wrong, and Carl finds himself locked in the flying house with this pesky boyscout he can't shake. Together, and with the aid of an exotic bird and a talking dog, the two will go on an adventure that will remind Carl yet again that it's relationships that count, not real estate.
Real estate is obviously a metaphor for everything our culture teaches us to wrongly hold in high esteem. Essentially, Up is arguing you don't need the big flashy things when you have a good relationship. Carl didn't need them when he had his loving wife, and he doesn't need them now that he has the boyscout as the replacement son he never had. In typical fashion, the point is emphasized through others going through the same revelations as Carl and even others going through the opposite (as in the film's baddies).
Overall, the plot and the message all smell a lot like Gran Torino, even though I'm pretty sure the two did not copy one another. While Clint Eastwood definitely holds the upper hand in a direct comparison between the two, such a comparison would do great injustice to Up simply because Up has its own marvelous virtues. Sure, it is obviously a commercial product intended to sell first and then work as a piece of art (in the usual way American cinema achieves such goals); sure, like most of its CGI peers it is overfilled (or is it over-killed?) with pop culture references and silly homages (e.g., the planes trying to get King Kong off the Empire State scene); yet one has to credit the imaginative way in which it conveys its message. I mean, people walking and holding a flying house with a cable the way you'd hold a balloon? That's quite a nice piece of originality, even if the talking dogs come at you from left field.
Up helped me forget the nightmare that was WALL-E and have a bit of faith in Pixar yet again.
Best scene: I couldn't help finding the montage scene at beginning of Up to be ever so touching in the way it showed Carl's relationship with his wife from the time they met as kids, through several crises, and up to the wife's death. Effective and touching.
Technical assessment: As expected, the picture on this Blu-ray is simply stunning perfection. That is, if you've stopped being disappointed from it lacking a 3D version, a particular shame given the film's short duration (92 minutes) allowing for the 3D version to reside in parallel to the 2D one on the same Blu-ray disc. The sound is nice and it uses all channels well, but I have found it to lack the aggressiveness former Pixar releases had.
Overall: Up-lifting. 4 out of 5 stars.
Posted by Moshe Reuveni at 2/09/2010 09:51:00 pm
Email ThisBlogThis!Share to TwitterShare to FacebookShare to Pinterest
Labels: Film