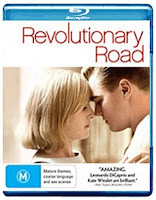 Lowdown: A young couple trapped in the expectations of fifties’ society.
Review:
Leonardo DiCaprio and Kate Winslet collaborated very successfully in Titanic. Revolutionary Road sees them collaborating yet again, this time in a very pessimistic mood set by director Sam Mendes of American Beauty fame.
Set in America’s fifties, Revolutionary Road follows a young couple from the first time they meet till a few years later, when they’re still young but with two young kids and a huge house located on Revolutionary Road. These are not the only changes in their lives: On their way from their humble beginnings to where they currently are, DiCaprio ended up taking this boring job at a big IBM like company, a job which he detests but does out of necessity; and Winslet has had to give up on her dream career of becoming an actress.
On the surface of things, our heroes have it all. They are young and good looking, the husband has got a respective job, they have two kids, they have a nice house in the suburbs. So why is it that they are not happy with their lives when everyone else thinks they should and when they seemed to have fulfilled the American dream to the letter?
Winslet comes up with an idea: Move to Paris, where real living takes place; she can get a diplomatic job that will earn the couple their living and then some, and DiCaprio can use the time to find what it is really wants to do with his life. For a while, prospects seem promising. But then reality kicks in: people around don't understand why our heroes feel they need to leave, even though everyone seems to be unsatisfied with their lives or jealous of others; and how can the wife take care of the family instead of the husband?
Acting plays a strong part in Revolutionary Road. Kathy Bates plays a minor part really well, and Kate Winslet gives such a performance you can see she's seeking official recognition for her acting talents with every fiber of her being (and deservedly so). DiCaprio? I've never found him particularly convincing, and in this film he peaks in that particular quality and ends up acting as a major detractor to an otherwise quite a solid film all around. One thing I do have to say about the cast: in true [?] fifties style, they all spend the duration of the film smoking; I really feel for their lungs.
What Revolutionary Road lacks in pacing and visceral impact, it makes up and then some with its serious and authentic discussion of the true values most people aspire to. As in, is a big house in the suburbs worth? I guess this message is ever so relevant for young Australian families, with house prices over here sky rocketing to make houses really unaffordable. Is family life all its cracked up to be, in the sense that everything else has to be sacrificed? Revolutionary Road claims that life without those small personal things that give us a sense of purpose isn't worth living, because those things we are programmed to aspire to by society - a respectable job, a big house, kids - will not lead to a happy and satisfying life on their on. It goes further to question even deeper foundations, such as the notion that the husband works and the wife stays home with the kids: we're not in the fifties anymore, but the vast majority of us still act by this rule. And did we ever stop to ask ourselves why?
Me? Trapped in my own little real estate adventure that threatens to consume years of income, I can not help agreeing with Mendes & Co. Nor can I help feel trapped like Winslet. As Revolutionary Road's example demonstrates, a truly happy life is a rather hard to hit moving target.
Best scene: Our hero couple agrees to meet a lunatic out on a break from his asylum house. However, we quickly realize this so called lunatic is probably the most sane person around, the only person that sees the situation through and tells things the way they are; everyone else is still running society's program code of house-job-kids in a robot like manner.
Technical assessment: The picture on this Blu-ray seems rather inconsistent, but overall it's pretty average. That's a bit of a shame considering Roger Deakins' masterwork of a cinematography job. Sound is a pretty subdued affair here.
Overall: As a film, Revolutionary Road deserves 3.5 stars out of 5 after the DiCaprio penalty. However, I'm giving it 4: the importance of the message and the thorough way in which it's discussed makes this one a film that will truly impact its viewer. It did me: This is not a film I am going to forget any time soon.
Posted by Moshe Reuveni at 2/15/2010 11:03:00 pm
Email ThisBlogThis!Share to TwitterShare to FacebookShare to Pinterest
Labels: Film

The more time that passes since I've seen this one, the less I remember liking it.
I agree the message is a good and important one, and performances were excellent (DiCaprio being on the weak side), but I thought it was a little over the top with the drama and depressing themes. I also didn't quite understand their relationship. Did they love each other? Did they not? Did they at one point and just fall out of love? Were they pretending? That made it difficult for me to follow their characters, and made me feel a bit alienated from the goings-on.

That said: Winslet is fantastic.

While I don't have the time perspective with which to reflect on the film, I tend to disagree with your main argument. The reason is simple: Most people I know display very similar symptoms to the ones displayed by Revolutionary Road's population. Me included, for what it's worth, but I have more specific example within my immediate family where the similarity is scary. So no, I don't think it's particularly over the top.
Second, I think the main point of the Winslet/DiCaprio relationship was that they were never in love, in the rational sense of the word. They were in love with the idea of having someone good looking by their side with whom they could achieve whatever it is society tells them they need to achieve. I consider this to be the main point of the film; I never perceived Revolutionary Road to be a simple tale of a relationship.