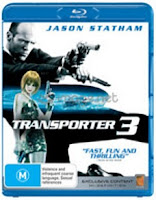 Lowdown: Our driver and his Audi go from West Europe to its East to save himself, a girl and the world
Review:
The first Transporter really knocked me of my seat with the excitement its opening car chase, set in Nice, brought along. It was just great action! Then Transporter 2 came along, and in an effort to refresh the by then familiar formula it changed the equation's order and put our driving hero, Jason Statham, in a position where instead of saving a girl he was fighting a girl. Or something, because no one really cares about the plot in Transporter films; they’re all about the action, and the action comes in two forms: high speed chases and martial arts fights that wouldn’t look like they don’t belong in a Jackie Chan film.
The formula refresh for Transporter 3, the latest in the series, is not a refresh at all: the franchise goes back to its grassroots and has Statham saving a girl. A rather annoying girl, a girl I was hoping he’d get rid of as soon as possible. We’re also reintroduced to Statham’s set of professional rules, familiar from film 1, and again they’re only there to be broken. On the positive side we have the rather funny French police inspector from a couple of films ago to provide the occasional comic relief.
Yes, there is also a plot, if you insist on one and if you don’t care for flimsiness or thin excuses to connect action scenes with: An evil international company is pulling an extortion trick on an idealistic Ukrainian minister in order to be allowed to dump its toxic waste in his country. The company hires the services of a big time American villain to do its dirty work, and that nice dude forces our favorite Transporter to take a package and a girl for him across Europe. In order to further motivate Statham to comply with his driving tasks despite serving the bad guys, Statham is strapped with a wristband explosive that will go off if he gets too far from his coveted Audi.
That’s it for the plot. Did I mention that Audi must have paid Transporter 3’s producers lots of dough for all the publicity its cars are getting? Especially when the baddies tend to drive rival luxury German cars that are so unreliable they keep on exploding or flying off the road. Besides, wasn’t Statham a Beemer in the first film?
It’s time to narrow the discussion down: Transporter 3 is not half as good as the first, and not even as good as its second. Having been trained by its predecessors we know what to expect so there’s no surprise factor while the car chases (and even the fights) are not as good as the original’s. Add the lack of plot originality (the difference between 3’s and 1’s is slight) and you have yourself a remake that won’t kill you or offend you if its action that you seek but will certainly not dazzle you. As far as silly action films are concerned, Transporter 3 is pretty standard; you might as well go and watch some Steven Seagal films next.
Silliest scene:
There’s some tough competition for this category, but if you accept the film’s spirit then you won’t count scenes where Statham drives his car on its side at more than 200km/h as silly; you’d just complain that it is clear the scene was shot at much slower speeds.
No, the winner of the silliest scene competition is the climax scene where Statham is so busy arranging a very sophisticated death to his nemesis he doesn’t bother thinking of this sophisticated death’s outcomes.
Best scene: Audi vs. train.
Technical assessment: The use of high contrast stock means you don’t get too much of a benefit watching Transporter 3 on Blu-ray. The soundtrack is aggressive, as expected, but far from appealing.
Overall: The Transporter series has overstayed its welcome. 2.5 out of 5 stars.
Posted by Moshe Reuveni at 1/11/2010 09:08:00 pm
Email ThisBlogThis!Share to TwitterShare to FacebookShare to Pinterest
Labels: Film

For the most part, I agree.
The girl was terribly annoying. I hated the part where she takes his keys had holds them slightly away from his reach. As if he couldn't break her arm off without even looking.

I'm curious about the parts we disagree about, but as for the girl:
Other than being annoyed at her, I'm annoyed at the Blu-ray's cover that has her holding a gun. She never holds a weapon in the film, so what's the point of this fake photo?