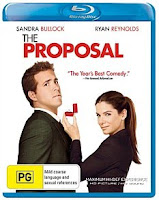 Lowdown, take 1: A guy is forced to marry his female boss so she can stay in the country.
Lowdown, take 2: A commercialized version of 1990's Green Card.
Review:
With our in-laws visiting us the variety of tastes confining our home theater forced me to go with the lowest common denominator when picking a Blu-ray to rent. I chose The Proposal, the latest in a very large number of romantic comedies starring Sandra Bullock. I knew The Proposal wouldn’t amount to much but I also knew we would watch it with a smile on our faces. I was absolutely right.
The Proposal is built around a simple idea, copied nonchalantly from Green Card. On one side we have Bullock as a very tough editor in an American publishing company with zero life outside the office. Her workers hate her guts but she keeps them on a tight leash, while her managers are happy with her professional performance. On the other side we have Ryan Reynolds, an innocent guy dreaming of becoming a writer who goes about fulfilling his dream by working as Bullock’s personal assistant. To this equation The Proposal adds the following twist: for relatively unclear reasons, Bullock – a Canadian – has to leave the USA for at least a year until her visa is sorted. What can Bullock do to keep her job? Marry an American, amongst other things. Marry Reynolds.
Bullock talks/forces Reynolds into it, and the rest of the film follows the consequences of them pretending to marry. Most of the film takes place in Alaska, Reynolds character’s home state, where Bullock goes to meet the family. The couple does not only need to convince the family, it also needs to deal with persistent immigration agents.
The rest of the Proposal can be summarized using very few words: Predictable, yet another promotion of typical American conservative/puritan notions (as in the way The Proposal cherishes the institutions of marriage and “family first”), stupid & shallow with the occasional laugh. And if you can’t tell how the film is going to end less than five minutes into The Proposal you better get yourself hospitalized.
The real catch with The Proposal, or rather its real problem, is with the casting. According to imdb, Bullock is currently 45 years old. The problem is obvious: By now Bullock is just too old to credibly play these silly romantic comedy roles that she seems to churn one after the other. Not that I’m saying she’s too old to act and that she should retire to an old people’s place; I think she’s a fine actress with great talent for comedy. It just wouldn’t hurt if she got scripts more suitable to her circumstances, that’s all.
Second, when Bullock is cast next to the 33 year old Reynolds, the age problem becomes even worse. Make up and camera work can only go that much to camouflaging the age difference; for too much of the film it feels like Reynolds is a boy next to his mother.
Worst scene: The second Bullock is told to be careful not to let the little family dog outside the house or eagles will get him you know what’s going to happen next. And when it does, in such a predictable and silly way, you have to feel shame for the cast and crew of The Proposal.
Technical assessment: An average Blu-ray all the way through.
Overall: With 2.5 stars out of 5, it’s time for Bullock to move to greener pastures.
Posted by Moshe Reuveni at 1/20/2010 10:27:00 pm
Email ThisBlogThis!Share to TwitterShare to FacebookShare to Pinterest
Labels: Film