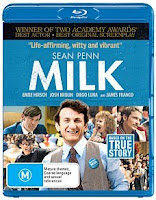 Lowdown: The story of the first openly gay elected official in the USA.
Review:
We tend to take the things we were born into for granted. We don't question electric light, for example, despite it being a relatively recent innovation that has had significant impact on the way people live their lives. Similarly, I find it hard to think of a time in which gays were actively prosecuted for their sexual preferences. Sure, they are heavily discriminated against, but it's never done under the pretense of actively seeking to harm them. Yet there were times in which this was not the case, and to my surprise I actually lived during those times.
Milk, a film by Gus Van Sant, tells the story of a gay activist called Harvey Milk (Sean Penn) who lived in the closet for most of his life in New York, but then decided he can't take it anymore and moved to San Francisco with his lover (James Franco) during the seventies. Circumstances make an activist out of him, and Milk soon runs for official posts in the city of San Francisco and finds himself a key representative in a fight against evangelical Christians who fight to promote anti gay legislation of a nature that makes me shiver with fear (and disgust). And then there's this catch: as the film starts, we learn that Milk was shot dead before making it to 1980. Thus the film builds up by telling us the story of Milk the activist while building things up towards his immanent death.
Milk's importance in gay politics cannot be underestimated, and the way Van Sant portrays it his main ticket was his call for gays to come out of the closet so that the whole population can see they know someone who's gay and that the gays don't bite. Personally, I agree with this policy and I try to follow it when it comes to my views on irrational beliefs: I'm not only an atheist, I openly publish my atheism and make sure those around me know the arguments in favor of atheism. I do so even when it's uncomfortable and even when it can earn me negative points, such as at the office, because - as Milk had said it - if you don't stand up for what you are, someone will come and take your right to be what you are away. What I'm trying to say here is simple: Milk's story is not only historically important, it is also a story I can personally identify with, and it's a story anyone who belongs to some sort of a minority can relate to.
In typical fashion, Sean Penn delivers a performance that is so good you really think he's Milk. Also in typical fashion, Gas Van Sant delivers a film that's thought provoking but rough around the edges (my impression is that the only time he wasn't rough was when he went commercial, as in Good Will Hunting): there's too much hand held photography, to the point of causing a bit of a seasickness; the story and the characters feel a bit disjointed, probably because the story is a real one and in real life not all events conspire to connect; and the character of Milk's killer was not developed as well as I would like to. That is, I finished watching the film and I still couldn't find myself convinced in the understanding of its motives.
Key scenes: There are many, but many, man to man kisses and sexual interacting going on in Milk. Which is fine because it's natural and it's fine because it's a key element of the story. Thing is, roughly 10% of sexual interactions are of the homosexual type; why is it, then, that such interactions occupy significantly less than 10% of the sexual interactions on mainstream cinema? I believe the answer to be that Milk's fight isn't over yet.
Technical assessment: The picture is rather mediocre as far as Blu-rays are concerned. Some scenes exhibit the result of insufficient lighting, either the result of shooting in authentic settings, going for authentic looks, or budget issues. The sound is nothing to call home about either.
Overall: An interesting story of significant importance that we should all be aware of given its relevance and its recent settings. Yet with all due respect, I have found it to be told in a bit less exciting a manner than I would have hoped such a story would be told. 3.5 out of 5 stars.
Posted by Moshe Reuveni at 1/14/2010 10:47:00 pm
Email ThisBlogThis!Share to TwitterShare to FacebookShare to Pinterest
Labels: Film