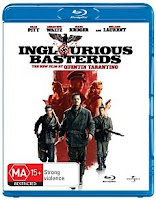 Lowdown: Cinema rewrites the history of World War 2.
Review:
My relationship with director Quentin Tarantino has known its ups and downs. First I didn't like him because of his love of extreme brutality (Reservoir Dogs), then I like him because he's cool (Pulp Fiction), then I grow indifferent because he's boring (Jackie Brown, Kill Bill), then I grow to hate him for lacking originality and for using annoying tricks (Pulp Fiction again), and then I hate him even more for directing porn with the clothes on (Death Proof). But I'll grant him this: I liked Inglorious Basterds, liked it enough to label it Tarantino's best thus far. Sure, it still has all the good old, annoying Tarantino trademarks (we got a discount on the time shifting this time around, though); so down to the subject matter to make things work this time around.
And the subject matter is World War 2, and Tarantino pulls the trick by giving us the version of World War 2 we always wanted: the one where the Jews kick Nazi ass. Who cares if this version does not have much to do with reality? It is the world of cinema Tarantino cares about, or rather a demonstration of the power of cinema to create a palpable reality and to please people.
The story features two main threads but lots of side characters with their own minor shticks that don't contribute much to the plot's advancement other than through prolonged dialog of typical Tarantino style. The first thread follows a group of Jewish American soldiers led by a native American (Brad Pitt, of course) who roam about Europe kicking Nazi ass all over the place and making themselves the terror of everything German. The second thread follows a Jewish girl called Shoshana (named after my third grade school teacher, no doubt about it): with her French family killed by the Nazis, she flees to Paris where she owns and runs a cinema (like most other Jewish refugees of the time); then opportunity for revenge presents itself when the head Nazi honchos decide to gather at her cinema to watch a film. Eventually, the various threads tie up together, even if not as nicely and elegantly as one normally expects of an American made film.
While Inglorious Basterds features some famous names in its cast, there is one actor who steals the show big time: Christoph Waltz, in his portrayal of the Nazi officer in charge of hunting down Jews and loving every second of it, is nothing short of amazing. Especially when compared to a severely over acting Pitt (although I suspect that's intentional). I guess you could say it's typical of Tarantino to bring up unfamiliar or forgotten talents to center stage.
He's also famous for doing that in the soundtrack department, and indeed Tarantino does that in here, too. This time, the most notable music piece is David Bowie's Cat People (Putting Out Fire), a song that was used in the not that great film Cat People. I'm familiar with it due to its inclusion in Bowie's Let's Dance album; in Inglorious Basterds it is wonderfully revived.
I've mentioned Tarantino's affection to porn earlier, so I will state that Inglorious Basterds is not exempt from the disease even if it's not as bad. Obviously, you can regard the entire theme of kicking Nazi ass as some sort of porn, but there are specific scenes that are more explicit. The scene in which a good hero and a German hero kill one another to leave their bodies in a very stylishly posed death scene is one example, but more notable is a scene in which a French farmer's daughters are presented before a German officer; you look at their presentation and you wonder whether you're witnessing people under war time conditions or people auditioning for the a starring role in a porn flick.
Best scene: Blooper alert!
The film's climax, where Hitler's body is both burnt and riddled with bullets in the background of a film presentation.
Technical assessment: In typical Tarantino fashion, this Blu-ray is not a technical achievement. It's probably made to feel old and dated on purpose. At least the soundtrack is nice...
Overall: Nice and interesting at 4 out of 5 stars.
Posted by Moshe Reuveni at 1/03/2010 03:11:00 pm
Email ThisBlogThis!Share to TwitterShare to FacebookShare to Pinterest
Labels: Film