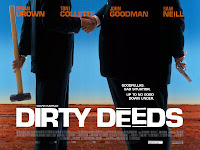 Lowdown: Tales of crooks’ fight over Sydney’s gambling joints during the seventies.
Review:
Dirty Deeds and I have quite a history together: This 2002 Australian film was the first movie I got to watch at an Australian cinema after arriving to Australia as a resident. I was still jet lagged when my brother took me to see it at Melbourne’s Jam Factory but I greatly enjoyed it. I wasn’t surprised at all when I greatly enjoyed it again this time around, too.
Dirty Deeds follows a battle for controlling Sydney’s gambling slot machines (aka pokies) during the seventies. Two main local factions fight it out, while at the same time the American Mafia is trying to have its share of the cut.
We are introduced to story through the eyes of a Sam Worthington who is yet to know future his acting career is holding for him. Worthington plays a soldier coming back from Vietnam to be picked up by his uncle (Bryan Brown). Brown’s character is generally controlling Sydney’s pokies with the aid of his gang, but he’s also facing some annoying competition. Not only that, a couple of American gangsters land in Sydney (John Goodman is excellent as one them) with the latest invention on their hands – a digital pokie machine – and they’re looking to see which side would better suit their need for money. The question then becomes, should Worthington commit to a life of crime, with its immediate gratifications but also with the dirt, danger and violence? Or should he focus on his dream to start a restaurant selling just one product he’d heard about from American comrades back in ‘Nam, a food called “pizza”?
As can be deciphered from my plot description, Dirty Deeds is a funny crime action thriller. It’s incredibly Aussie in nature: the cast is full of big time Aussie or neighboring to Aussie names (Toni Collette, Sam Neill). Dialog is Aussie as, with not a word spoken without using heavy Aussie slang. And the character is Aussie: the innocence of the seventies’ crime scene, that feeling of being removed from the rest of the world due to sheer distance, but also the way small time crime is commonly accepted to such a level that everyone is a crook – not just those calling themselves crooks.
Style wise, Dirty Deeds copies its style very directly from the likes of the new Ocean’s Eleven films (ala Ocean's Thirteen) and from Guy Ritchie’s work (e.g., RocknRolla). It’s not just the plot revolving around small time criminals doing very pathetic things to themselves, it’s also the look, the editing and the camera work.
If it wasn’t for the accents and the slang, you could have easily mistaken Dirty Deeds to be a Guy Ritchie film. But you won’t, because Dirty Deeds is definitely Aussie: it’s simpler with its twists and it’s much more down to earth. Which means that at least in my book it’s a better film. Oh, and there’s the soundtrack, with AC/DC’s title song pumping at you regularly so you won’t forget where you are.
Best scene: Goodman teaching Worthington how to make real pizza, Italian style. Or should the title go to the scene in which Black expresses contempt to the whole idea of fast food in general and pizza in particular?
Overall: Excellent entertainment at 3.5 out of 5 stars.
Posted by Moshe Reuveni at 1/27/2010 10:14:00 pm
Email ThisBlogThis!Share to TwitterShare to FacebookShare to Pinterest
Labels: Film