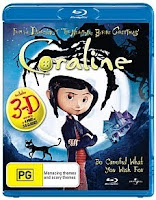 Lowdown: An attention seeking girl needs to choose between her real parents and seemingly better ones.
Review:
The last Neil Gaiman based film we got to see, Stardust, turned out to be a major success at our living room. Which is exactly why I was looking forward to putting my hands on a copy of the newest Gaiman based film, Coraline.
Unlike Stardust, Coraline is done in a very Tim Burton like style of stop motion animation, ala Corpse Bride. The puppet we're following is Coraline, a little girl that just moved with her working from home parents to a new area that seems rather a middle of nowhere dump and is occupied by rather eccentric neighbors. What's occupying Coraline's mind, though, is acquiring more attention from her parents; and thus when at night she finds a secret portal that takes her into an "other world" where she finds parents similar to hers in everything but the buttons sawed to their eyes and their going out of their way to please her, the temptation to leave her real world in favor of the other is really there.
I have found Coraline to be a rather problematic film. For a start, despite its rather short length (circa 80 minutes), it took a long while before I found it to cease being boring. Second, in the typical Tim Burton style the film mimics, it is a very dark affair that's not for the overly timid; Gaiman turns Coraline's dilemma into a proper horror story. Literally, the film is a nightmare; even the good characters are rather scary, and identifying with anyone takes too much from the suspension of disbelief. In a film that is obviously targeted towards younger audiences, all of the above are - excuse the repetition - problematic.
Yet perhaps the worst problem with Coraline has to do with the way it delivers its message. Coraline ends up having to choose between good parents that don't pay her attention and parents from the dark side that overindulge her; according to Coraline, there is no middle ground. Well, I wholeheartedly disagree. Regardless of my own opinions, it seems Coraline is Gaiman's way to make children behave: by scaring them to death.
Worst scenes - blooper alert:
The film's climax, where Coraline escapes the horrors of the other world, are properly scary ones. If it wasn't for the stop motion they'd be classified as horror. I wouldn't want my kids exposed to that.
Technical assessment:
The picture on this Blu-ray is downright impeccable, the type that makes you go wow and rush to buy a Blu-ray player. The sound is not up to the same standards but it's damn good, too.
For the record, the Blu-ray contains the film's 3D version in addition to a "normal" 2D version; our rental shop did not provide the glasses, though. Nice to have the option, though!
Overall: I was disappointed. 2.5 out of 5 stars.
Posted by Moshe Reuveni at 1/10/2010 03:43:00 pm
Email ThisBlogThis!Share to TwitterShare to FacebookShare to Pinterest
Labels: Film