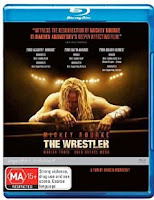 Lowdown: An aging wrestler has to deal with forced changes.
Review:
None of us has went and seen a black hole from the inside and came back to report it, with the possible exception of Mickey Rourke. Since Nine and a Half Weeks and its sort of a sequel Wild Orchid you could have easily been led to believe the guy went down a black hole. Sure, he had an appearance here and there, as in Sin City, but compared to the impact of his days of old – nothing. The Wrestler, however, brings Rourke back on the agenda.
This time around he’s not the sexy macho lover of old. Or rather he is, but with two extra decades down his belt: The Wrestler has Rourke playing a once world champ wrester living, twenty years later, in the shadows of his former career. His health is in the ruins and his body cannot take the punishment anymore: between the drugs to pump his body up with, the tanning and the hits received on stage, Rourke collapses with a heart attack. He then needs to decide how to move on with his life: continue living as the shadow of his former self and risk dying, or change? Change, in Rourke’s case, means potentially embracing his estranged daughter; getting a day job; or getting into a serious relationship with a stripper with whom he seems to have something of a click. That stripper is played by the always excellent Marisa Tomei, who does the female equivalent of Rourke's wrestler through her stripper character having to contend with motherhood and an aging body that is not as sought after in the strip club as it might have been before.
It’s interesting and all, but once you start getting the hang of The Wrestler it all becomes too predictable and obvious: Quickly enough I stopped cheering for Rourke’s character and developed ambivalence towards him, because there’s just that much you can take from a person that keeps on making all the wrong moves.
There’s an obvious metaphor with The Wrestler, and the main ingredient that makes it work is Rourke himself: The story of The Wrestler living off his former glory has obviously been tailor made for Rourke, an actor in decay – physical as well as mental - now living off his former glory. In many respects, this theme is shared with Van Damme’s recent JCVD.
What made The Wrestler work on me is the extension of the metaphor. This inability to change the way we work despite the guaranteed self destruction and the hurdles we put ahead of ourselves on the way towards more sustainable, and ultimately more rewarding options, is very much the story of the human race and its dealings with global warming. The warning signs are there for us and have been there for a while, yet – at least judging by the actions of our leaders – we prefer to go to hell rather than depart from our precious fossil fuels.
An odd note to conclude this review with: The Wrestler takes it for granted that wrestling matches are a pre-orchestrated circus. The wrestlers themselves sure beat one another up, but they do so in a controlled manner. Not that this comes as a great surprise to me (I used to like watching wrestling action as a teen), but it always seemed to me like a taboo subject; something no one would openly admit to.
Notable scenes: Marisa Tomei’s numerous full on striptease scenes. Seriously: the scenes – well executed as they are – made me feel sorry. Sorry for Tomei, an accomplished actress by all accounts, having to do them. As in, did she have to take her clothes of and then some in order to keep her career alive? On the other hand, I could see how she may be interested in doing the scenes for artistic reasons, and I find it hard to think up a scenario in which I'd have a real problem with nudity.
But still: Tomei really takes her clothes off and perform; Rourke gives us a short glimpse of his ass. Isn't that sexual discrimination?
Best scene: Rourke walks into an empty house but pretends he’s about to go into a wrestling match, shaking from side to side Rocky style (and the similarities between boxing and wrestling are obvious, even though boxers will point at wrestling’s predetermined outcomes). The point is that the film support’s Rourke’s imagination by providing crowd noise and music to go, sort of telling you what is going on in Rourke’s head and the contradiction between that and the reality around him. A nice moment of cinematic artistry.
Technical assessment: You could have fooled me and told me this Blu-ray is actually a DVD, because the picture was what I would rank as average DVD quality rather than Blu-ray. Sure, it’s obvious The Wrestler was not made with a budget that will allow for slick looks, but it is also obvious The Wrestler went for the bad looks on purpose; problem is, it went too far in my book.
The sound is pretty average, to say the least, and the nostalgic eighties’ hard rock music is pathetic / stupid / nice (all of the above), which probably supports the film well.
Overall: The power of this film is in the relevancy of its core metaphor. 3.5 out of 5 stars.
Posted by Moshe Reuveni at 11/09/2009 09:54:00 pm
Email ThisBlogThis!Share to TwitterShare to FacebookShare to Pinterest
Labels: Film