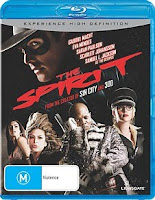 Lowdown: Superhero comics.
Review:
I’ve never heard of The Spirit before renting it, and I only rented it because an otherwise empty shelf of Blu-rays for rent sent me exploring for the expansion of my horizons (as much as that can be achieved through my rental library’s Blu-rays, which tend to be limited to mainstream stuff). I picked the Spirit because it was a superhero film and because it was made by the guy that did Sin City. Not that Sin City knocked me off my seat or anything, but it did have a fresh look.
And looks are all The Spirit can offer, because it sure doesn’t have a story we haven’t heard before. The Spirit is a guy who died but his spirit remained, leaving him unable to die despite severe the physical punishment he often takes in the line of duty. Being the ex cop he is, Spirit (portrayed by Gabriel Macht whom I don’t believe to have encountered before) uses his super power to protect the good and fight evil. In particular, he fights The Octopus, an evil mirror image superhero portrayed by Samuel Jackson. The battleground is Spirit’s city, about which he eternally romanticizes in his film narration. But between fighting the evil Octopus and his sidekick (Scarlett Johansson in yet another uninspiring appearance; does anyone still remember Lost in Translation by now?) over a flask of blood with divine qualities, our Spirit finds himself terribly occupied with the women in his life: His childhood sweetheart (Eva Mendes), the doctor that stays up all night to mend his wounds as quickly as possible, and a mysterious French super-heroine (portrayed by the rather Spanish Paz Vega).
Indeed, the plot is pretty mundane. The looks aren’t; the film is made to look like a comic book, and it does so amazingly well. It looks the part throughout, with every scene seeming to have just popped out of a comic book and into your TV. I can explain how this was done but I’ll just do The Spirit poor service; it’s a collection of elements all assembled together (with the aid of CGI, no doubt). Style follows suit, in the way the narrator tells us what goes on in characters’ heads and the transition scenes.
Yet when all is said and done, the style does not make up for rather boring and mundane plot with too many characters left way too under developed.
Worst scene: The only exception to the comics look is a scene where a Nokia mobile phone is boldly advertised. Shame on the film and shame on Nokia.
Technical assessment: This Blu-ray features exceptional picture that serves its presentation perfectly. The sound is very good, too, albeit a step behind top notch.
Overall: Yet another proof that style does not generate substance. The king, or in this case The Spirit, is too naked at 2 out of 5 stars.
Posted by Moshe Reuveni at 11/12/2009 10:48:00 pm
Email ThisBlogThis!Share to TwitterShare to FacebookShare to Pinterest
Labels: Film