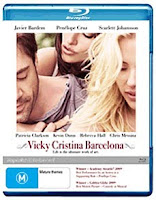 Lowdown: Two naïve American girls mature through a visit to Barcelona.
Review:
I like Woody Allen even if he does seem to be an old pervert craving young girls. That said, issues with his latest film, Vicky Cristina Barcelona, made me wonder how good the film could have been if the same story was to be told in a better way.
Vicky Cristina Barcelona tells the story of two young American women that go to spend a few months at a friend’s place in Barcelona. Vicky (Rebecca Hall) is engaged to a promising business man and seems to know exactly what she wants out of life, while Cristina (Scarlett Johansson) is said to have just finished directing a short film she also stars in; she's totally disappointed with the result. In short, Cristina is meant to be Vicky’s opposite: someone who has no clue what she wants out of life. The clueless budding artist compared to the calculated. Film wise, the key element to Vicky and Cristina’s introductions is the extensive use of a narrator telling you what they are and what they’re thinking as opposed to expressing those elements using pure cinema language. I have found the narrator, who keeps coming back for long speeches, to be quite a detractor.
Anyway, as one may expect, upon hitting Barcelona our characters face evidence countering their preconceptions of life. Particular focus is given to Vicky, who – despite her engagement – falls for a smooth talking artist with an open approach to sex (Javier Bardem, the psycho killer from No Country for Old Men). Dilemma follows: from that point in time onwards, she can only see her fiancé is the boring guy he is (and always was); but should she leave the safety of his company in favor of the emotional Bardem?
Cristina’s story follows similar lines and augments Vicky’s. Most of the story is told using dialog (and that annoying narration!), and unlike what you may expect from Allen this is not a comedy although it has its entertaining moments. The point of Vicky Cristina Barcelona is to create an argument in support of following one’s sexual desires in order to ensure one’s happiness under the pretense of "art", as if to explain to us why it makes sense for certain old geezers to have a go at their young stepdaughters.
The problem with the argument, at least the way it’s presented in Vicky Cristina Barcelona, is that life is not black and white. You rarely have to make an extreme a choice as Vicky has, as in the choice between financial safety plus predictability as opposed to raw emotions and great sex. Usually, if given a choice in the first place, the various options vary only slightly in their shades of gray. Not only that, I argue that the film’s preferred choice (Bardem) is quite a bad one: we have every reason to believe Vicky would not have found life long happiness with him.
Perhaps Woody Allen is trying to tell us life long happiness cannot be found anywhere, and perhaps he’s correct. What I argue, though, is that were I to be in Vicky’s place I would have dumped the fiancé as quickly as possible because he was a boring Australian Liberals voter type person; and as for a replacement, as flashy as Bardem is I wouldn’t have thought of him as anything but a source of some short term pleasure that I can learn from (and then have a lifetime with which to look for someone worthy of spending the rest of my life with).
Oh, I do have further criticism: Were Hall and Johansson really acting there? I’m asking this because to me they seem to have presented a real lacklustre acting show, almost allowing me to say I could have done a better acting job than them (and I’m a male, for a start). It could have been that they were directed to act the way they did by an Allen attempting too hard to make them seem the typical dumb Americans one envisages when one thinks of Americans’ generalizations (especially during the Bush era). But those generalizations are false, and Allen’s output is problematic just the same.
So, do I have a good thing to say about Vicky Cristina Barcelona? Sure; it made me want to visit Spain and Barcelona in particular. And as I have recently discussed, I think visiting other places and getting to see the world through the eye of other cultures are two of life’s best experiences, eye openers that on a large scale should put an end to all wars.
Representative scene: Bardem, in a relationship with Cristina, brings his distressed ex-wife Penélope Cruz home. As they bring one another up to date with their situations, Bardem keeps on urging Cruz to speak English for Cristina’s sake. Only that he does it in Spanish. Great humor!
Sound quality: Woody Allen has a thing against surround sound, which makes this Blu-ray an example for wasting good potential away. It’s even sadder when you listen to the splendid soundtrack filled with Spanish style music in this limited fashion.
Picture quality: If you thought the sound is bad, wait for the picture: everything has this reddish-yellowish hue about it. It’s obviously intentional, but I couldn’t figure out what it was trying to achieve; it just made everything look so terribly artificial.
Overall: A very compromised film, so I'm going to be harsh and give it 2.5 out of 5 stars, with Barcelona and its surrounding earning most of those.
Posted by Moshe Reuveni at 10/28/2009 10:06:00 pm
Email ThisBlogThis!Share to TwitterShare to FacebookShare to Pinterest
Labels: Film

Follow your sexual desires and you'll be happy? Really?

I didn't get that at all.

I would argue that Vicky will be much happier than Cristina. She won't turn into Kevin Dunn's wife because she did see the other option, and that it's not really for her.

My biggest problem with the movie was that I don't really like SJ. But since I’m not sure we're supposed to like Cristina that much, I'm not sure it was that problematic.

And you left out Haim's favorite part.

BTW, did you watch Barcelona? (or Metropolitan?) I was reminded of it (and not just because of the location). Of course, it's possible that Whit Stillman's movies try to imitate Allen's – he got there first, after all (like

I obviously interpreted the way the film left Vicky off in a different way to you, but I don't see much point in arguing about it.
As for the Stillman films, I've never heard of them before (or at least I don't recall them). Are they worth looking for?