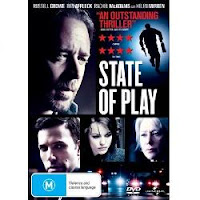 Lowdown: A reporter on a murder case uncovers big money/power secrets.
Review:
Till watching it, I have learnt of State of Play mostly through its radio commercial. Assume that edgy male voice that’s used on all movie promos as you read the following: “Russell Crowe… Helen Mirren… [shooting sounds] State of Play…”
The weird thing about that promo is that State of Play features many other stars (e.g., Ben Affleck, Robin Wright Penn) doing much more than what Mirren does in her minor role of a cliché Brit. And the other weird thing is that State of Play, while featuring guns and ammo, is not an action film; first and foremost, State of Play is a film that tries to remind us why the newspapers of old are so important by showing us a reporter doing what a reporter should do. It’s an ode to proper, investigative, journalism.
Russell Crowe does run the show, though. This time he’s an old style investigative reporter working for Washington Globe (a newspaper meant to clone the real life Washington Post) who has a hard time accepting that the times, they are a-changing. For a start, his paper is now owned by MediaCorp (a company meant to clone Rupert Murdoch’s real life NewsCorp), and their interest is in money, not journalism; and second, he doesn’t acknowledge the potential professional talents that may hide in the paper’s internet side. That is, until he has no choice but to cooperate with a blogger from the electronic edition, Rachel McAdams, in order to uncover the details of a weird murder case.
As our pair works around its investigations, constantly beating the cops in their game, they reveal connections with other crimes. Notably, a connection with the death of Affleck's assistant, and the rather mysterious circumstances in which that death took place just as Affleck, a senator, was running a probe into a security company that tends to take justice into its own hands in areas such as Afghanistan and Iraq (and now the USA). And things get even more complicated as we learn Affleck is Crowe’s best friend and that Crowe has something going on with Affleck’s wife (Wright Penn).
Things get tense as Crowe gets closer to having his life prematurely concluded by that corrupt private enterprise his investigations lead him to. And the deeper we go into State of Play, the clearer it becomes that director Kevin Macdonald is trying his hardest to convince us that all this uncovering could not take place without a journalist being able to do his thing the way he should and that the internet cannot replicate the same benefits that good old fashioned paper based reporting can achieve. It is no wonder Watergate is mentioned on numerous occasions throughout State of Play, both directly and indirectly.
For the most part, I agree with the director. Bloggers are no substitute for proper investigative journalism. Because they are mostly tools for delivering opinions as opposed to facts and because they are mostly an individual enterprise with not much of a backing and not enough resources to support them, blogs cannot be relied upon for keeping those in power from abusing their power. It is also clear that proper journalism is mandatory for keeping our democracy at bay: Just check the case of Mohamed Haneef to see how badly we need objective reporters to prevent the government from abusing its power. However, my question to the film is this: Rather than praising an endangered occupation, aren’t we discussing an already extinct one?
Have a look at Australian newspapers today. Most are under the control of NewsCorp, that company that is so rightly accused by State of Play as a force playing against professional journalism and a force promoting their own agendas through the media they control. But have a look at The Age, Melbourne’s most serious newspaper: How many cases of investigative journalism can that paper boast? Barely a few each year; most of the news is made of “this politician said this” while “that politician said that”, with the rest of it made of news releases. Investigative journalism is dead and has been dead for a good few years now; big money has won the game a while ago.
There are just a handful of proper Crowe like journalists out there now. Never has the future of democracy as we know it relied on so few, and the sad reality is they don’t have much of a future.
Worst scene: As good as State of Play is, it’s ending is horrible. The build up is all nice, cool and reliable; but then the end arrives with the filmmakers trying too hard to surprise us. The taste in my mouth suddenly turned bitter.
Technical assessment: The picture is rather mediocre for a Blu-ray, but the sound definitely enhances the experience.
Overall: It would have been 4 if it wasn’t for that ending, but as it is State of Play still gets a credible 3.5 out of 5 stars.
Posted by Moshe Reuveni at 10/26/2009 10:19:00 pm
Email ThisBlogThis!Share to TwitterShare to FacebookShare to Pinterest
Labels: Film