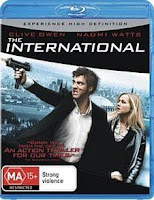 Lowdown: An Interpol detective hunting a bank selling weapons to the highest bidder.
Review:
Clive Owen was the star of the two films that probably constitute the best new films reviewed by this blog, Children of Men and Inside Man. That, plus his excellent guest performance in Extras, earns him a lot of credit; it also makes me wait in high anticipation for his next releases. The International is one such release, and it doesn’t settle with featuring Owen alone: the film was directed by Tom Tykwer of Run Lola Run fame. Expectations are rarely higher, and lucky me has the privilege of stating they are entirely justified.
In The International, Clive Owen plays an Interpol detective with an obsession. He is positive this Luxemburg based bank he’s been tracking for years is heavily into arms dealing, and he is also sure that the bank is covering its own tracks by killing every person that can potentially compromise it. This obsession of his cost him his job in English police, relegating him to Lyon, and as the film starts it also costs him the life of his partner. Only a rare few believe Owen’s bank obsession, and these include a Naomi Watts playing a DA from New York (where the bank is quite active in its dealings).
On their own, the couple finds clues to help decipher the bank’s mystery. They move about from one international scene to another, including Milan, New York and Istanbul. On their way they encounter mystery and action, rendering The International very thrilling indeed; it’s like a James Bond but without the gizmos and the glamour.
Indeed, Owen’s hero character is the complete opposite to Bond. It’s hesitant, lacking the killer instinct; and throughout the film, Owen takes extra care to appear scruffy (perhaps even unreliably so). It sort of reminds me of his character in Children of Men spending most of the film in its thongs but without the comedy element of it.
Interestingly, The International’s story is based on a real bank that did all the naughty things the film’s bank does; it’s just that the film's bank has been moved twenty years forward to modern times. However, the real beauty of The International is in what it is trying to tell us. That goes through certain levels, from a discussion on the bad things that can take place in businesses and the way the corporate world is the real ruler of our universe, to the value of the objective truth as opposed to perception.
Too many people I know, including some I regard as friends, seem to behave under the assumption that laws of morality and ethic codes applying to their personal lives do not apply to their professional lives. Real estate agents seem to be able to sleep soundly at night after systematically cheating their clients, insurance agents denying money from those in true need are still distinguished members of society. I argue, and so does The International, that this should not be the case; ethics and morality codes may change with the zeitgeist and there cannot be a definitive set of such rules in our world, but an obvious wrong is a wrong. And when a close friend of mine signs his emails with a signature saying “perception is reality” it annoys the hell out of me, because it implies there is never an objective truth and in effect implies we can determine issues of morality as we feel like.
A film sending me on such philosophical trains of thought has to be worth watching.
Best scene:
A shootout at New York’s Guggenheim Museum has to qualify as one of the more intense action scenes out there. Given how real things looked and how well they compare with my personal memories of the museum, I was actually surprised to learn filming did not take place at the real Guggenheim but rather at a studio . On the other hand, given the destruction taking place during the scene, it doesn’t make sense for it to be shot at the real thing.
On that Guggenheim note, and as the supplementals on the Blu-ray suggest, architecture does take a major role in The International. The different buildings in which key events take place tell us a thing or two about the people in them and the people we are becoming. Most notable is the setting for the rogue bank’s headquarters, shot in Volkswagen’s city of Wolfsburg. Overall, the intent is to show how architecture affects us and how our ways affect our architecture; architecture is very much there with the supporting cast.
Technical assessment: The picture on this Blu-ray is rather mediocre with much more noise than acceptable. The sound, however, is amazingly good: it doesn’t go for a bombastic atmosphere, and many moments in The International are just eerily quiet; it rather goes for realism, and does so to a great effect (especially when the action kicks in).
Overall: A solid performer through and through. 4 out of 5 stars.
Posted by Moshe Reuveni at 10/01/2009 10:13:00 pm
Email ThisBlogThis!Share to TwitterShare to FacebookShare to Pinterest
Labels: Film