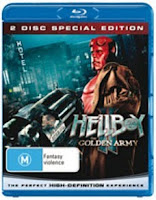 Lowdown: Freakish superheroes save humanity from a vengeful enemy.
Review:
The story of a bunch of freaks fighting for the sake of all humans without a shred gratitude from their beneficiaries. Is this the story of Al Gore and his fellow global warming campaigners? No, it’s Hellboy 2: The Golden Army, of course.
We’ve watched the original Hellboy film a few years ago and found it good entertainment, enough to merit the rental of its sequel. By now I don’t remember much of the first, but it doesn’t matter: Hellboy 2 would make you feel right at home and give you all the character introductions you will need.
Hellboy 2 features an ancient elf plotting to rid this world of its main problem, humanity, through the reactivation of an army of golden robots designed for that exact purpose eons ago. The only opposition to said elf is a bunch of freak superheroes kept in secret by the American government. The film’s hero freaks are made of four characters: an intelligent fish humanoid, a ghost with a German accent (the result of Seth MacFarlane doing a voice not unlike Klaus’ from American Dad), a woman that occasionally goes on fire, and Hellboy. Hellboy, if you didn't guess it by now, is a creature from hell that looks the part, is quite powerful, got a concrete like arm, and is overall quite a cheerful and good hearted juvenile. Together, our group of heroes will start at New York and go till the ends of the earth to save us all. And lest we forget, there’s also some romance between our Hellboy and the fiery woman.
Directed by Guillermo del Toro, Hellboy 2 features plenty of the concepts from his previous film, Pan’s Labyrinth; the various freaks and monsters mingling in a world dominated by humans with mythical elements are good examples for those. There is a major difference between the two films, though: while Pan is a dark and often scary film, Hellboy is sheer fun. Sure, it tries to raise the question of whether we humans deserve this world that we are so effectively bringing down to its knees. And sure, it does criticize people for their reluctance to accept the foreign even when that foreigner is saving their lives.
But those points are of relatively minor importance in the grand Hellboy 2 scheme. Between its fine special effects, numerous actions scenes and plenty of fooling around, Hellboy 2 is a fun film to watch. Sure, it’s overall forgettable, but it’s nice escapism too.
Best scene: The leading freak superheroes, Hellboy and the fish-humanoid, get drunk and do stupid stuff together as their respective lovers give them a hard time. Call me a freak, but I like to see the human side of my superheroes, and Hellboy does that well: its heroes are very imperfect, often stupid, and most importantly – political correctness is beyond them.
Technical assessment: This is a Blu-ray to lick your fingers with. The picture is very good, but the sound – oh, the sound. It’s loud, it rocks, it’s detailed, and it’s damn good; it made me long for those pre-baby days when we could listen to movies at the volume levels they were meant to be listened to. Indeed, Hellboy 2 is a Blu-ray to alienate your neighbors with; it’s so good it’s worth it (disclaimer: I don’t really mean that last statement; you know what I really meant).
Overall: Cheerful entertainment. 3.5 out of 5 stars.
Posted by Moshe Reuveni at 10/07/2009 09:22:00 pm
Email ThisBlogThis!Share to TwitterShare to FacebookShare to Pinterest
Labels: Film