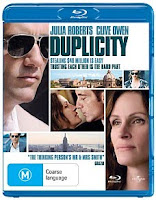 Lowdown: Two spies cooperate/fight one another over a case of industrial espionage.
Review:
I have raved about the virtues of Clive Owen only recently, so I will avoid doing so again for his part in Duplicity. What I will say, though, is that Duplicity is not a one man show; it features three other A list stars, Julia Roberts, Tom Wilkinson and Paul Giamatti, the last two of which supply us with yet another signature performance. For Owen and Giamatti, Duplicity represents a bit of a reunion: the pair has worked together to produce a small marvel with Shoot ‘Em Up. Indeed, Duplicity shares a common attitude with Shoot ‘Em Up, both of which are films which do not take themselves too seriously; Duplicity, though, offers some more depth.
Duplicity starts with two introductory scenes: The first one shows us how Owen (MI6) meets Roberts (CIA) while on a field mission; the two do whatever a man and a woman tend to do inside film’s hotel rooms, after which Roberts drugs Owen and steals some secrets out of him. Then, over the opening credits (discussed below), we learn about a very personal business rivalry between Wilkinson and Giamatti.
Roll back a few years forward, and we meet an Owen whose career was ruined by Roberts’ treachery. Now he’s in industrial espionage between two rivalling cosmetic companies (run by Wilkinson and Giamatti), and he’s about to meet a mole from the other side. Naturally, this mole turns out to be Roberts!
The rest of the film portrays the struggle/affair that ensues between Owen and Roberts as their industrial espionage case gets hotter and hotter. Both regard themselves as more than ordinary people and both act according to this assumption of theirs, aspiring for more than what mere mortals can expect to have (in the materialistic sense of the word “more”). But, in their quest for that “more”, are they cooperating, the way the MI6 and the CIA are expected to, or are they still fighting one another? As the spying develops we receive the occasional flashback that throws things into a new light; many of the things we have been assuming up to that point turn out wrong, to be replaced by a new set of assumption, only to be replaced by the subsequent flashback.
It sounds frustrating but it isn’t; it’s all very entertaining and effective; it’s thrilling and it’s funny. Duplicity’s reason for existence is this constant transition between being in a state of confidence and feeling duped. Sure, it is often a bit silly, but so is the world of corporate affairs the film makes such a mockery of (and, as a side effect, the notion of nationalism).
There is a bit of a sting taking place at Duplicity’s ending. It came as a bit of a surprise to me, but it was also a bit silly in the sense that its lack of reliability detracted a bit from an otherwise authentic, albeit extreme, experience.
Best scene: Owen instructs Roberts how to deliver her lines so they can trick others the next time they meet in the field. Roberts looks at Owen and asks: “Are you directing me?”, a question that seems to be posed at Duplicity’s director and thus us, the viewers, more than at Owen. And it appears both heroes are aware of it; it’s that good old cinema within the cinema metaphor.
Technical assessment: This is a good Blu-ray in all respects. The opening credits, featuring Wilkinson and Giamatti having themselves a good old fashioned slow motion fight next to their private jets is poetry in motion for the sound department: the accompanying rhythmic music is very well recorded by movie standards, and Blu-ray’s superior sound delivery creates a majestic experience.
Overall: This comedy / thriller / romantic comedy is good all-around entertainment. 3.5 out of 5 stars.
Posted by Moshe Reuveni at 10/23/2009 11:33:00 pm
Email ThisBlogThis!Share to TwitterShare to FacebookShare to Pinterest
Labels: Film