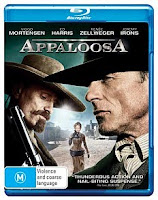 Lowdown: Two guys come in to help a town get rid of evil elements.
Review:
Appaloosa is one of those low key film that you just know have the potential to be really good by virtue of their low key release allowing artistic aspirations to prevail over those coming from the marketing or accounting departments. Appaloosa is directed and led by Ed Harris, one of Hollywood’s icons of unfulfilled potential; its co-star is Viggo Mortensen with his excellent track record and a tour de force performance in Eastern Promises up his sleeve. And, indeed, Appaloosa is a classic member of the Western genre that delivers the quality its ingredients suggest it would.
The town of Appaloosa is suffering from a menace that prevents its financial development: Jeremy Irons, who refuses to abide town law and kills its agents. The “town elders” are scared, but not scared enough to surrender: they bring in Harris and Mortensen, a couple of law enforcers with a good track record of helping frontier town rid themselves of Irons’ likes. Our couple of heroes are rather unique, especially in comparison to their environment: professionals all the way, they are not flashy in their ways, they don’t tell everyone how good they are, and they know one another well while fully respecting one another. Most of the time they uphold the law with themselves before asking others to do the same (with the exceptions being good philosophical fodder). Can these two rid Appaloosa of Irons, a guy backed up by a large company of brutes?
The situation gets a tad more complicated when a woman enters the scene. Renée Zellweger arrives with just a suitcase as company and immediately sets her sights on Harris. But is there more to her than meets the eye? And will her arrival crack the connection between Harris and Mortensen?
Overall, Appaloosa is a slow paced, cool and relaxed exploration of human values put under stress: the friendship between our duo on one hand and the all so very human way of turning a blind eye when money is at stake on the other. Not that its pacing means it’s uneventful; Appaloosa is full of thrills, it’s just that it doesn’t bombard you with camera shakes. It doesn’t hype itself, instead letting the action do the talking.
With a magnificent desert like setting and cinematography that is a pleasure to the eye, coupled with good performances from its very talented cast, Appaloosa is a very well made film that delivers on all accounts.
Best scene: Zellweger accuses Mortensen of laying his hands on her, but Harris doesn’t believe her even for a second even though she his is wife to be. The scene demonstrates the value of unconditional trust that comes with well founded camaraderie. Personally, the scene touched me because it is exactly such camaraderie that I find missing in my current place of work: that sense of automatic trust between team members and between employers and managers that I did find, to one extent or another, in the better organizations I have had the pleasure of working for.
Technical assessment: A good Blu-ray in all respects. Although quite pleasant on the eye, what I really liked the way the sound was designed to compliment the spirit of the film.
Overall: It’s a pity low key films like Appaloosa are a minority. 4 out of 5 stars.
Posted by Moshe Reuveni at 10/12/2009 10:21:00 pm
Email ThisBlogThis!Share to TwitterShare to FacebookShare to Pinterest
Labels: Film